Australian schoolchildren have become pen pals to Holocaust survivors to lift their spirits in isolation as part of a heartwarming project developed by Sydney’s Jewish Museum.

Before the museum closed its doors along with all non-essential services on March 23, Australian survivors had shared their remarkable stories with students, school groups and visitors almost every Tuesday since it opened 28 years ago in 1992.

As the country entered lockdown, museum coordinator Ilana McCorquodale saw an opportunity for survivors to embrace the nostalgia of letter writing while forging new relationships with the children they should have been speaking to face to face.

Ms McCorquodale told Daily Mail Australia she has been ‘inundated’ with interest from parents and children, who are have already developed ‘beautiful friendships’ with their elderly correspondents in just two months.

Some survivors write to more than one pen pal, such is the interest in the initiative.

Heartfelt conversations have unfolded between young and old, restoring a sense of purpose to survivors who are among those most vulnerable to the impact of confinement and isolation.

Honest, thoughtful and simple, the letters offer insight into coronavirus through the inquisitive eyes of children, and stand as a sobering testament to the enduring trauma still experienced by Jewish survivors, 87 years since the Nazis came to power. 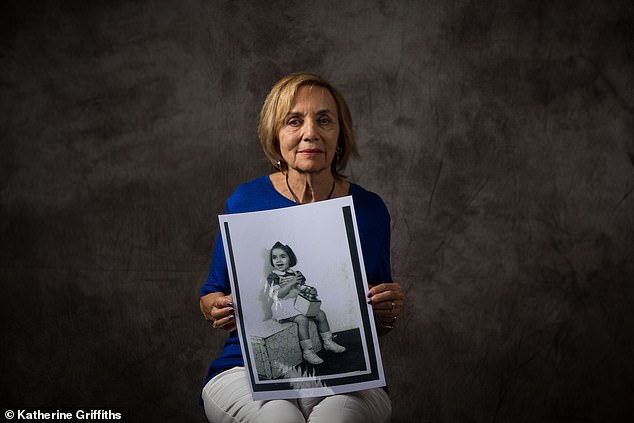 Author Kitty Lowringer, who was born in Budapest, Hungary in 1943 and survived the war with her mother. They emigrated to Australia on Christmas Day, 1949. Here, Kitty holds a photograph of herself taken on her third birthday in Budapest in 1946, by which time the Nazis had murdered her father as he tried to escape a forced labour camp.

Slovakian-born Paul Drexler and his parents lived in hiding in a farmer’s attic until September 1944, when they were rounded up for transport in the final ‘resettlement’ of Slovak Jews.

Aged 6, Paul was deported to Theresienstadt, a concentration camp and ghetto near the town of Terezin in Nazi-occupied Czechoslovakia, where he and his mother were prisoners until the Allies liberated the region in May 1945.

His father was taken to Sered labour camp in southern Slovakia, where he was murdered by members of the notoriously violent Hlinka Guards in late 1944.

Now 82, Paul remembers this time in his letters and compares the fear he felt to the anxiety he has experienced since the pandemic began.

‘Our current isolation reminds me of the frightening days during 1944,’ he writes.

‘The COVID-19 is making life difficult. By taking care, we will all be fine in a short time. Take care and stay safe. Love, Paul.’ 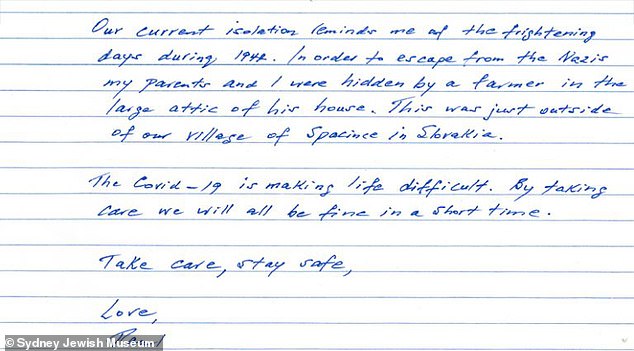 A letter from Slovakian Holocaust survivor Paul Drexler to his new pen pal, in which he recounts his time in hiding in 1944 and discusses his anxiety about the present pandemic

Author Kitty Lowringer survived the war with her mother in Budapest, Hungary, and was still a small child when the Allies reclaimed Europe in the spring of 1945, younger than her new pen pal Jonathan is today.

‘It is good to see that you are choosing to look at the present lockdown with a positive attitude,’ 79-year-old Kitty writes to Jonathan.

In a particularly poignant part of her letter, she says they may lose contact when restrictions are lifted, as school resumes and free time becomes less, but encourages her young friend to maintain his optimism and do good things with his life.

‘I am not sure if you’ll have time to write to me once school goes back, but I hope that you will continue in making the best choices and keep your positive outlook on life,’ she writes, signing the note ‘your pen pal, Kitty’. 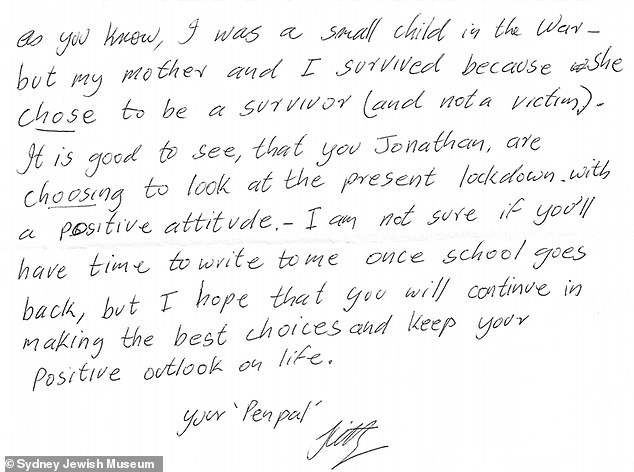 A letter from survivor ‘Kitty’ to her young pen pal Jonathan, where she encourages him to maintain his optimism and make good choices in life

Clued-in schoolboy ‘Jayden S’ shares his opinion on a coronavirus conspiracy theory, but is more interested in learning about his pen pal’s background.

‘This brings me to my next topic, where do you come from? (Not in a rude way but like in a tell me more about you sort of way),’ he writes, careful not to cause offence.

Magda, 77, reflects on the unusual Pesach – Passover – celebrated by Jewish people this April, which was characterised by empty chairs that would normally be filled with visiting friends and family.

‘Hope and pray that this world tragedy will come to an end soon,’ she writes.

‘In the meantime, we have to make the most of the time we spend together with our family. Looking forward to your next letter.’ 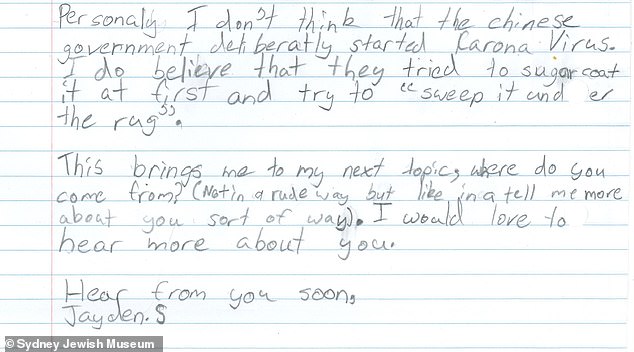 In this short note, schoolboy Jayden S shares his opinion on a coronavirus conspiracy theory and respectfully asks his pen pal about his childhood 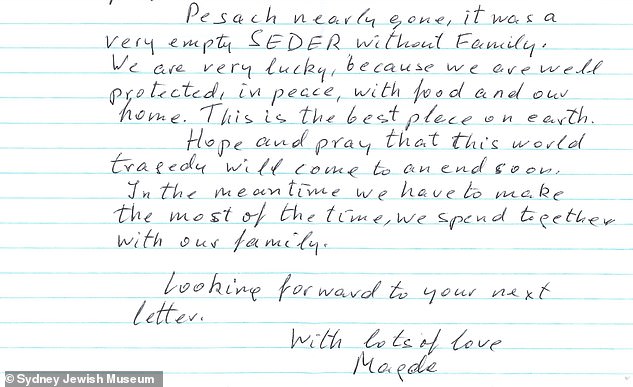 A letter from survivor ‘Magda’, who reflects on the unusual Passover celebration of 2020 characterised by empty chairs that would normally be filled with visiting friends and family

Sydney schoolgirl ‘Summer’ drew a painting for her 93-year-old pen pal Olga Horak, who was evidently delighted to receive such a thoughtful gift.

Olga survived the war through a series of miracles with her mother Piroska, and were liberated from Bergen-Belsen concentration camp together shortly before her 19th birthday on April 15, 1945.

But less than two days later, while queuing to be registered as displaced persons, Piroska collapsed and died in her daughter’s arms, clutching her newly issued identity card between her fingers. She was just 39 years old.

Despite losing her beloved mother when she was still a teenager, Olga overcame unimaginable adversity to live a remarkable life in Australia, settling in north Sydney where she founded a successful clothing factory with her husband John – a fellow survivor. 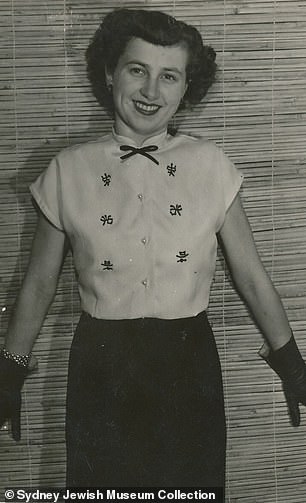 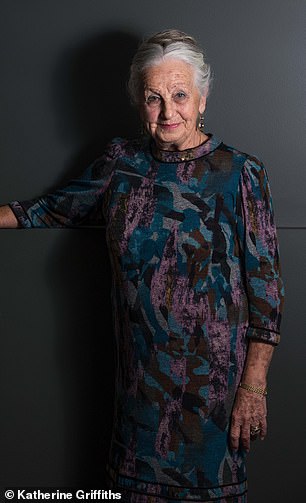 Then and now: Czechoslovak Holocaust survivor Olga Horak wears a blouse she designed herself at her clothing factory in Sydney in the late 1950s (left), and a dress she stitched by hand at Sydney’s Jewish Museum in 2019

‘I thank you sincerely for your beautiful letter with your enclosed art painting. You are a very gifted young lady, you are also very intelligent,’ Olga writes to Summer.

The fashion designer says she is excited to meet Summer at the museum ‘once the dangerous coronavirus’ has passed, in messages that clearly show the warm friendship developing between the unlikely pair.

Ms McCorquodale and her team of educators plan to organise a group meeting between survivors and their pen pals whenever social distancing laws permit.

‘There really has been so much heart that’s gone into this. Having them come face to face will be a really special moment,’ she said.