Coronavirus patients can suffer from shortness of breath and fatigue for MONTHS after their battle with the disease, government scientists warn

Coronavirus patients could be left short of breath for months after their battle with the disease, according to government scientists.

SAGE, a panel of exerts who advise Number 10 in emergencies, also warned Covid-19 survivors may endure weeks of fatigue.

Concerns about the lasting effects of the illness were discussed in a SAGE meeting which took place on May 7.

Boris Johnson raised fears for his health in his first Downing Street briefing after he was discharged from intensive care following his bout of Covid-19.

The Prime Minister leaned on his lectern with both arms and his opening remarks on April 30 were punctuated by strained inhalations.

Other Brits who have fought off the virus have revealed throughout the outbreak that they have been wiped of energy and left struggling to walk up the stairs. 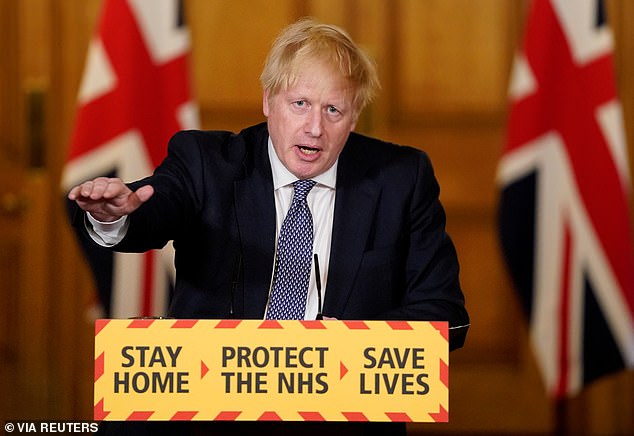 Boris Johnson was bereft of his characteristic ebullience on April 30, during a strained first Downing Street briefing since his period of intensive care for coronavirus

Scientists are currently clueless as to how long it takes infected patients to fully recover from Covid-19, which has killed 370,000 people worldwide.

The more serious someone’s illness is, the longer it takes, and those who end up in intensive care may be left with permanent damage to their lungs and liver.

Physiotherapists also warn patients can suffer a loss of mobility, if they are stuck on hospital wards for weeks, or endure flashbacks and emotional distress.

Scientists think it is likely people become immune to the virus in at least the short term, meaning they won’t catch it twice, but they are not certain.

SAGE called for studies to investigate the lasting effects of the illness, which some experts have branded ‘post-Covid disability’ and likened to polio.

How long does it take to recover from coronavirus?

Doctors say it’s unclear how long it takes people to truly recover from COVID-19, however anecdotal evidence suggests it can take months.

Indeed, when the Prime Minister was rushed to intensive care, experts issued grave warnings about how long he would be out of action for.

One medical precept holds that for every week a patient is in intensive care, there will require double that time to fully recover once discharged.

The more serious someone’s illness is, the longer it takes, and those who end up in intensive care may be left with permanent damage to their lungs and liver.

Scientists think it is likely people become immune to the virus in at least the short term, meaning they won’t catch it twice, but they are not certain.

COVID-19 is caused by a virus which mainly attaches to and attacks cells in the lining of the airways and the lungs, which is why sufferers find it so difficult to breathe.

The body’s immune reaction is what causes symptoms – swelling in the areas where the virus is attacking makes the airways close up and make it hard to breathe, and patients cough to try and expel the viruses and dead lung tissue from their bodies.

The immune system also causes a high temperature and aches and pains as it tries to make the body too hostile for it to survive.

And patients become exhausted as the virus makes the lungs unable to get enough oxygen into the blood, depleting muscles’ energy supplies.

While the vast majority of people who catch the coronavirus survive – some with medical help, but many without – the effects of it can linger on for weeks afterwards.

Officials published a trove of meetings and scientific papers on Friday, laying bare the advice ministers were given during the crisis.

Minutes from the meeting on May 7 read: ‘SAGE also noted the existence of longer-term health sequelae.’

This, the team said, included the ‘persistence of extreme tiredness and shortness of breath for several months’.

Advisers also warned of rare symptoms such as strokes and kidney disease, both of which have been linked to Covid-19.

One scientific advisor to the Government told The Telegraph ‘a very high proportion’ of Covid-19 survivors ‘cannot get back to a normal life’.

Seven observers and government officials also attended – but the names of four of them were hidden.

The boss of NHS England last week warned the UK was seeing a ‘substantial new need for rehab and aftercare’.

His comments came as the NHS launched its first hospital to help patients recover from the long-term effects of the illness.

More than 100 staff were recruited to work at the Seacole Centre in Leatherhead, Surrey, which opened its doors on Friday.

Physiotherapists fear a ‘tsunami of demand’ in the wake of the pandemic, with one group saying it was ‘incredibly worried’ about a post-Covid spike.

SAGE met for the first time in January as a ‘precautionary’ measure, 22 days after the virus was reported in China.

The committee noted testing capacity in Wuhan was already ‘overwhelmed’ and said there is evidence of person-to-person transmission.

They also talked about the then lack of evidence on whether patients can spread the virus before showing symptoms and what the viral incubation period is.

WHAT ARE THE SYMPTOMS OF COVID-19?

The NHS lists the following as the main symptoms of the coronavirus:

The Centres for Disease Control and Prevention (CDC)

Until recently, the CDC only listed three symptoms of coronavirus on its website:

Last week, the CDC expanded its list to include the following signs: