What you can and can’t do in Victoria from TOMORROW: Everything you need to know about the state’s strict new lockdown, which suburbs are affected – and the four reasons you can leave your house

Stay-at-home orders will be reintroduced for more than 310,000 residents in 36 suburbs across Victoria from 11.59pm on Wednesday following a spike in coronavirus cases.

Work, exercise, receiving care and food shopping will be the only legitimate reasons people in the suburbs which have been identified as coronavirus hotspots can leave the house.

In the past two days alone, the state has identified 139 new cases of the deadly respiratory infection.

The impacted suburbs are: 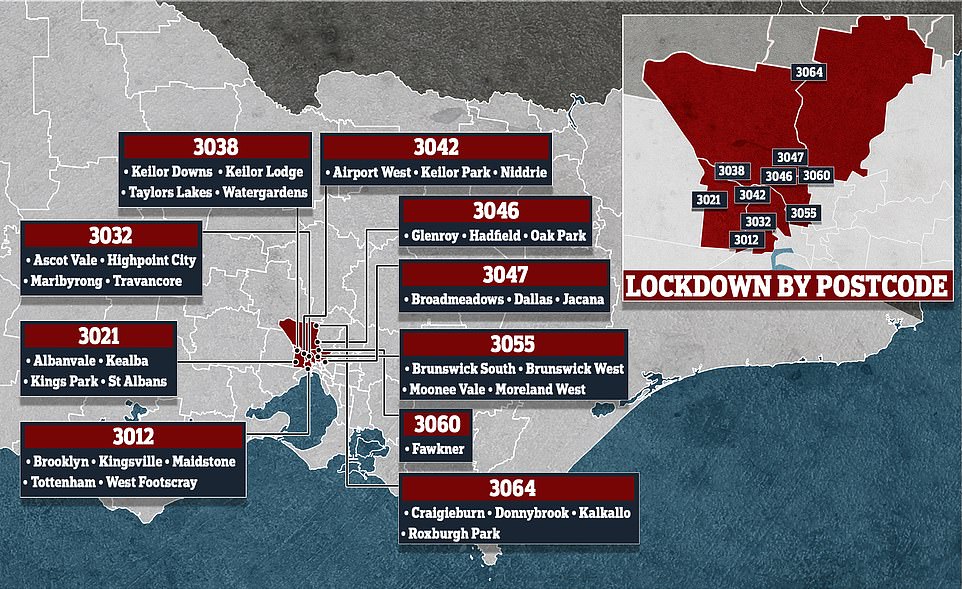 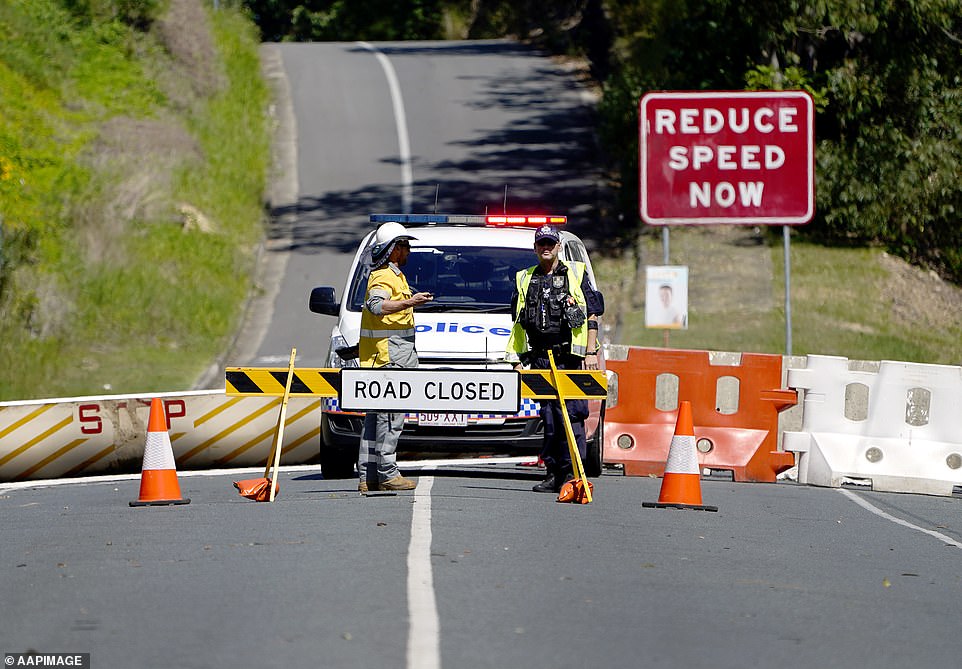 Police will randomly pull cars over in Victoria to ensure the occupants are not from the locked down suburbs. Queensland will also stop Victorians entering the state while letting all other Australians in from July 10. Pictured: The border near the Gold Coast

After just four weeks of freedom, residents in those ten postcodes will be banned from leaving their homes except for work and school, food shopping, giving care and daily exercise.

Daily Mail Australia takes a closer look at what Victorians living within impacted suburbs can and can’t do from Wednesday.

Going to work or school

Victorians living inside the locked down suburbs will still be able to attend work and school.

The state government will encourage people to work from home where possible.

During the initial lockdown, students were discouraged from attending classrooms and schools increasingly offered virtual classes to compensate for low attendance rates.

It appears Mr Andrews is not looking to go down that avenue again and assured the public that attending school was a legitimate reason to leave their homes during the stay-at-home orders.

Students are currently on school holidays in Victoria, but Mr Andrews said they would return to face-to-face learning when they open again. 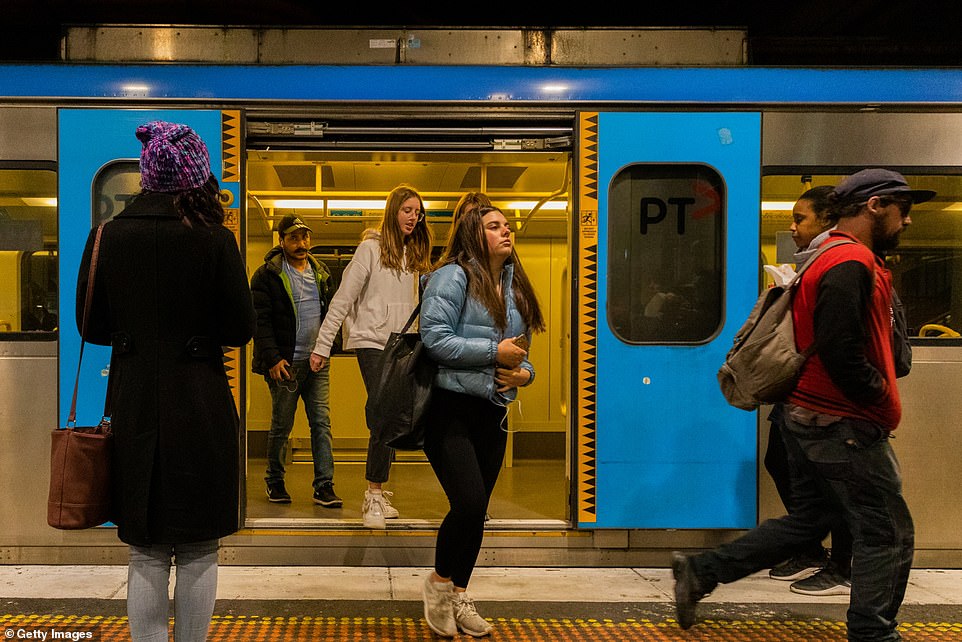 Victorians living inside the locked down suburbs will still be able to attend work and school. Pictured: Commuters getting off a train at Flinders Street Station 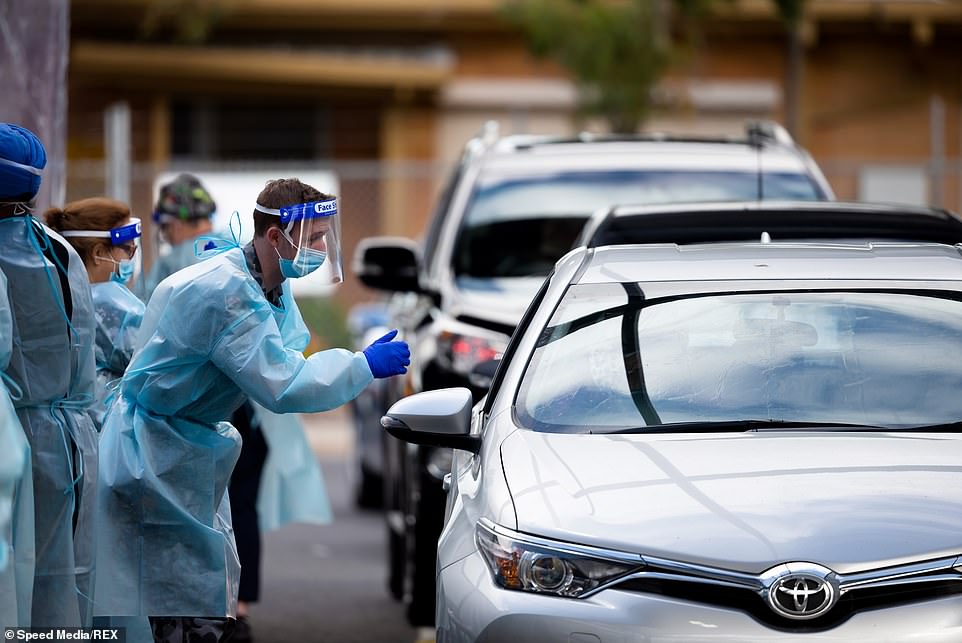 Getting coffee or lunch with friends

Non-essential social activities will be banned from 11.59pm on Wednesday for people living in the impacted communities.

Restaurants, gyms, pubs and all other non-essential services in the suburbs must once again close their doors.

They will also not be able to travel outside of their communities to visit non-essential services in other suburbs. 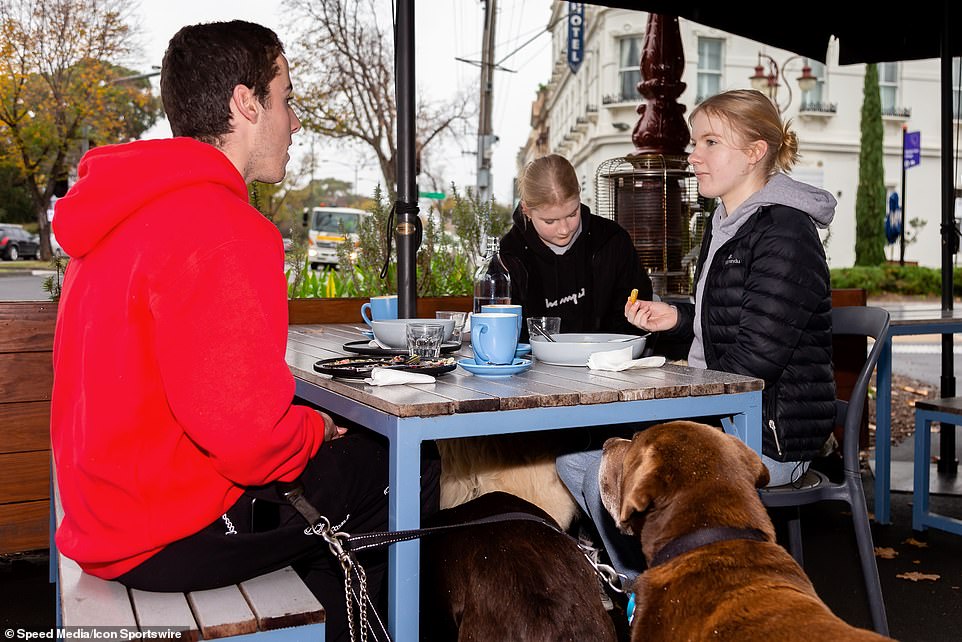 Non-essential social activities will be banned from 11.59pm on Wednesday for people living in the impacted communities. Restaurants, gyms, pubs and all other non-essential services in the suburbs must once again close their doors 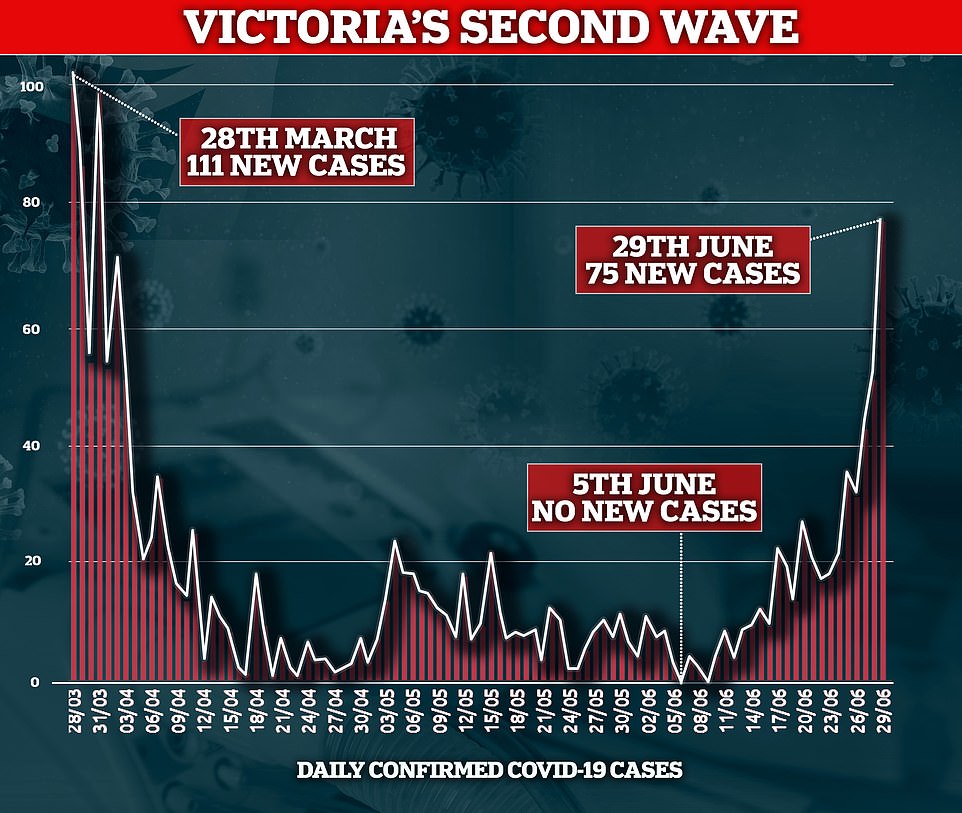 Daily exercise will be permitted, as it was in the initial lockdown.

But Premier Andrews has already announced that people should not use that as an excuse to socialise and be outdoors longer than necessary.

‘It is not an opportunity to be taking daily exercise for the whole day,’ he said.

Police will patrol the suburbs subject to lockdown and are prepared to fine anybody breaking the rules.

‘We have to limit the number of people who are going in and out of these post codes and sadly we have to ensure that residents, families within these post codes, do not leave their home other than for those four permitted reasons and, again, only when they need to,’ Mr Andrews said.

‘Police will be actively — actively — enforcing these suburban lockdowns, this stay-at-home order. 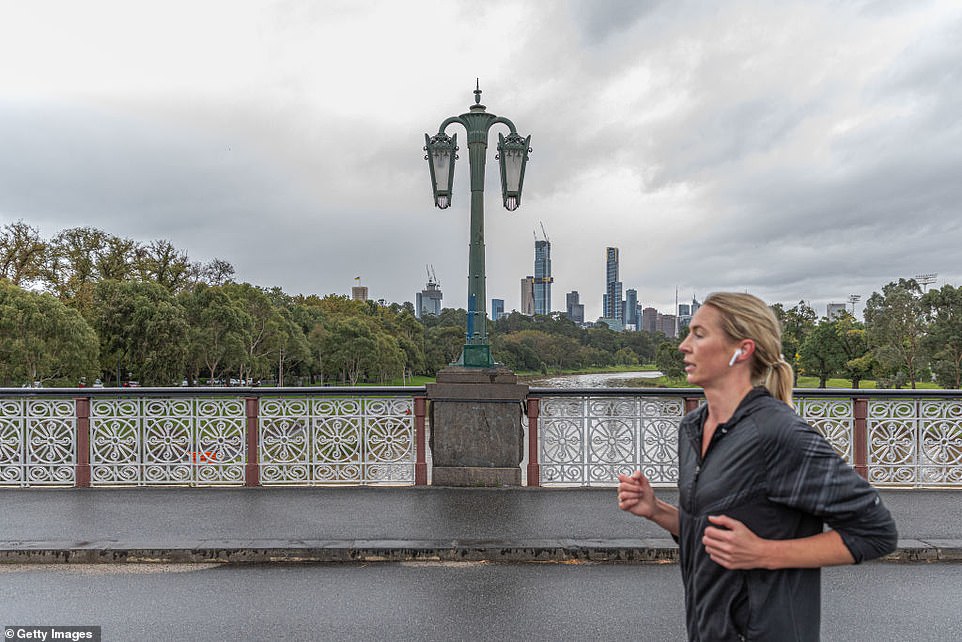 Daily exercise will be permitted, as it was in the initial lockdown. But Premier Andrews has already announced that people should not use that as an excuse to socialise and be outdoors longer than necessary

In line with stay-at-home orders, any non essential shopping will be forbidden for the next four weeks for people within these communities.

Non-essential businesses within the suburbs will be forced to close, and people will not be able to travel outside of their regions for shopping.

Police will be enforcing the orders with random vehicle checks similar to random breath tests and will dish out on-the-spot fines.

Shopping for food and essentials

Shopping for food and essential goods will be considered a legitimate reason to leave home during the four week lockdown.

Grocery shopping, visiting a pharmacy or doctor will all fall under this category.

Booze bus-type checkpoints will be set up at the main entrances and exits into the suburbs, where police will be waiting to stop cars randomly to question where they’re heading.

“So not necessarily every vehicle, but vehicles will be stopped randomly… in an organised and coordinated way and people moving in and out of the suburb will be asked to identify themselves,” Mr Andrews said. 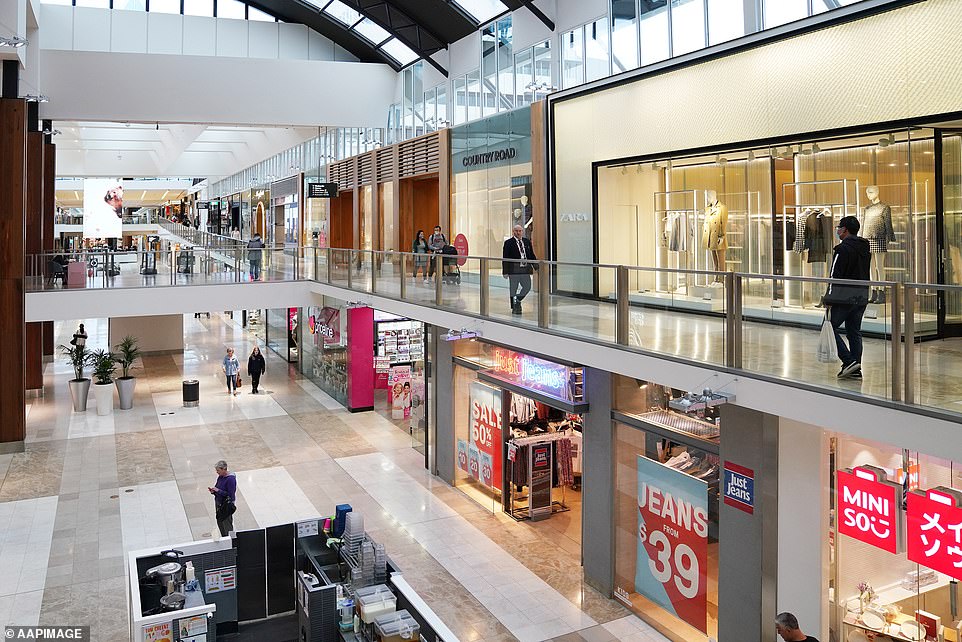 In line with stay-at-home orders, any non essential shopping will be forbidden for the next four weeks for people within these communities

Community sport within the impacted suburbs has again been suspended.

The stay-at-home orders will be in place until at least July 29, when they will be reassessed depending on the level of community transmission and active cases.

Anybody seeking care or responsible for the care of another person will be able to continue as usual.

They are encouraged to maintain social distancing practices where possible and follow the correct hygiene practices.

People living in locked down suburbs can leave their homes and towns if they are providing or receiving essential care that is not available to them within their regions.

Victorians living outside of these locked down communities will begin enjoying eased conditions in the coming days and weeks.

Five guests at a time are permitted inside homes, while up to 10 people can gather together outdoors for recreational purposes.

Cafes, restaurants and other hospitality venues are also welcoming patrons in spite of the uptick in COVID-19 cases throughout the state.

People living outside the flagged suburbs are also welcome to travel within the state and can visit New South Wales – though Premier Gladys Berejiklian has restricted any Victorian from visiting sporting events until the virus is again brought under control.

Visiting relatives who live inside the locked down community will not be allowed.

The only exception to this rule will be visiting relatives or dependents who require immediate care.

Authorities are still considering whether the same rules will apply for people in a relationship with somebody who lives in a locked down suburb.

An answer will likely be announced on Wednesday. 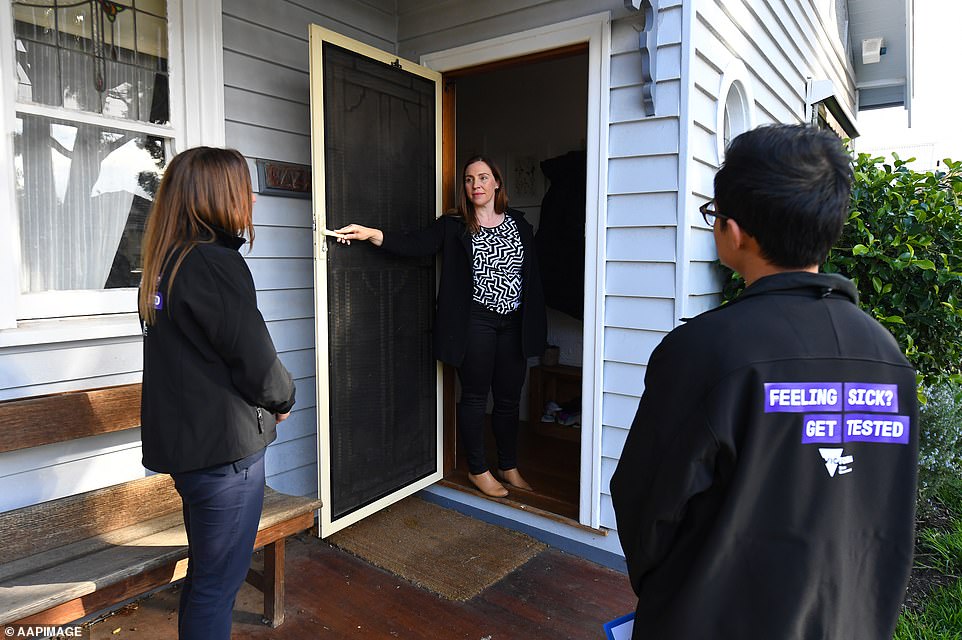 There are almost 1,000 people in two of Victoria’s COVID-19 hotspots who have refused to undergo testing for the contagious virus.

Premier Daniel Andrews last week announced a suburban ‘testing blitz’ for residents in Broadmeadows and Keilor Downs as part of a desperate attempt to control a spike in infections.

‘I do feel obliged to inform you that in Broadmeadows and Keilor downs alone some 928 people refused to be tested,’ he said.

‘Now I can’t change that. That’s happened. All I can do is encourage those people come forward and get tested today.

‘Come forward and get tested tomorrow and in a broader sense if someone comes to your doorstep and asks you to be tested please say yes. Please get tested.’ 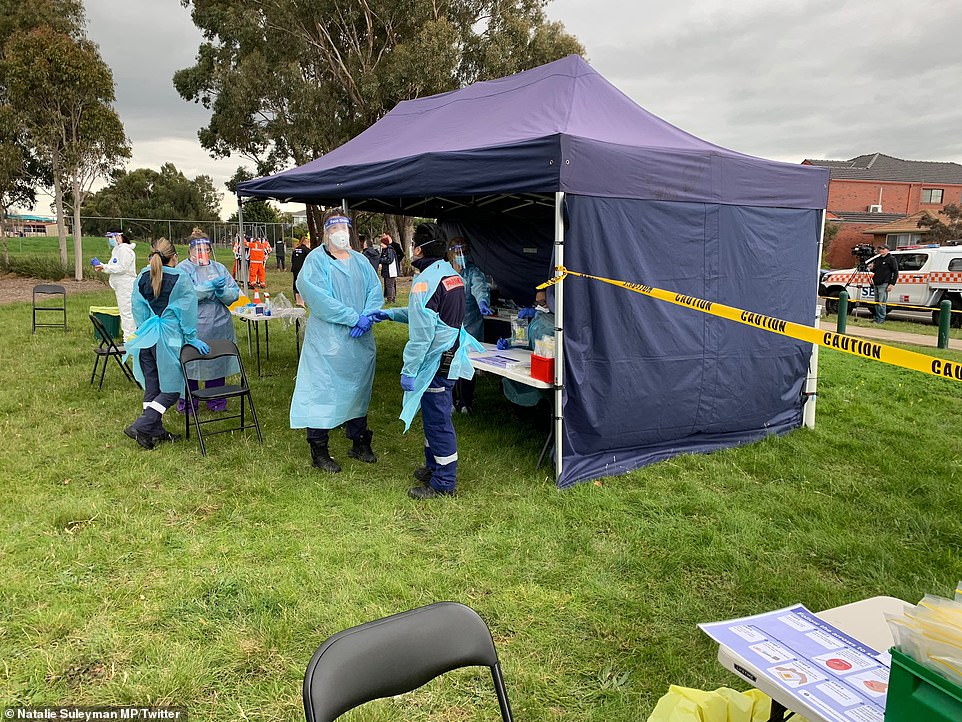 A mobile testing site is set up in Keilor Downs, Melbourne, amid the spike in COVID-19 cases 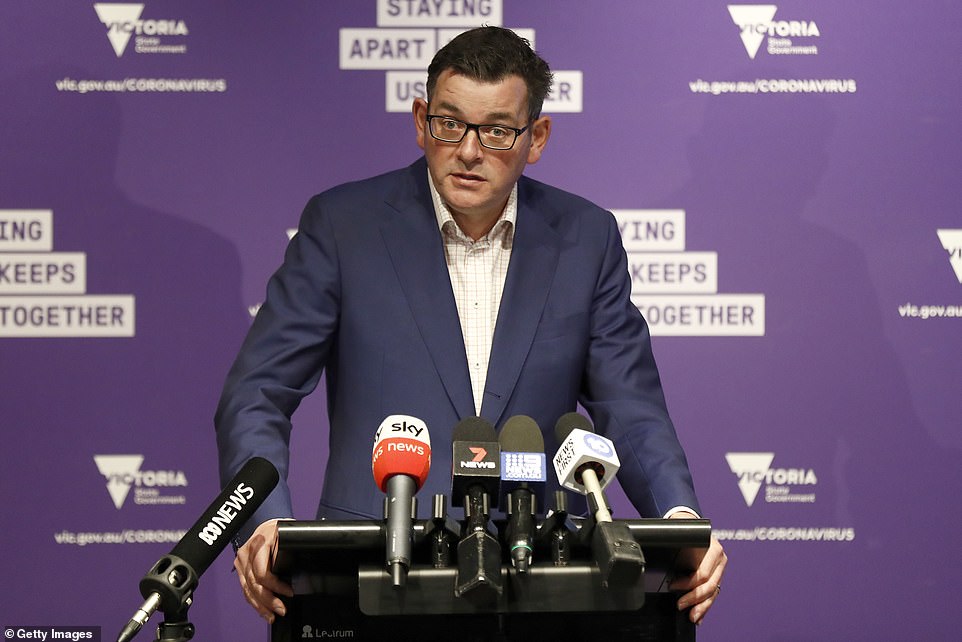