Could rain save the day? Heavy downpours across Britain will put dampener on Super Saturday as police fear reopening of pubs will be as busy as New Year’s Eve with A&E units resembling ‘circuses full of drunken clowns’

By Mark Duell for MailOnline

Police fearing ‘Super Saturday’ would end in drunken violence across Britain breathed a sigh of relief today after forecasters warned it could be a washout as pubs reopen for the first time in three months since the lockdown.

Much of the UK is facing wet conditions this weekend with the heaviest and most frequent downpours in western areas along with strong winds, which will be a blow to those looking forward to enjoying a pint or meal outside.

But the forecast will please police federation leaders, who said the public will be ‘out in droves’ this Saturday, with one fearing a return to Accident and Emergency units resembling ‘a circus full of drunken clowns’ at weekends.

The Met Office said the rain will remain in the West and North West into next week, but brighter and drier weather is on the way in the South and East as many Britons head on a staycation with hotels and B&Bs also reopening.

While the rain will disappoint many people going to pubs for the first time since they were shut on March 20, it will be a boost to officers who had feared a ‘real apocalyptic day’ if conditions had matched last week’s heatwave. 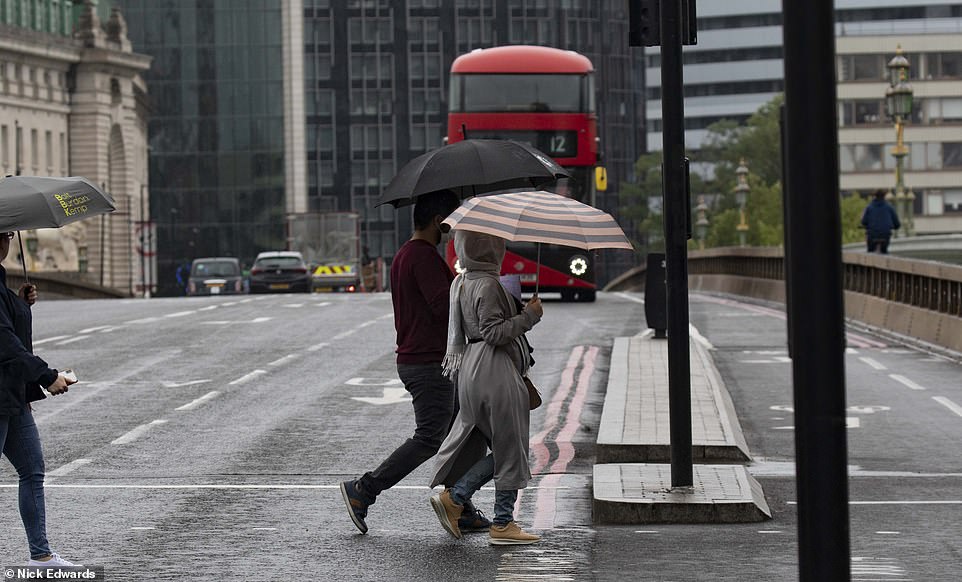 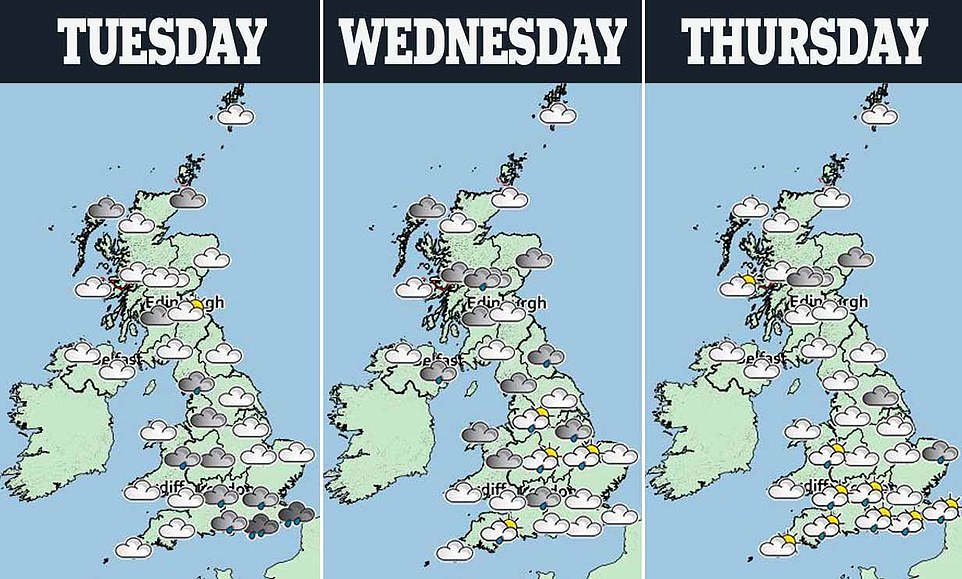 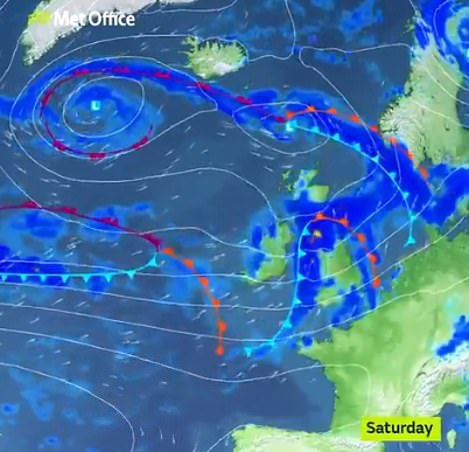 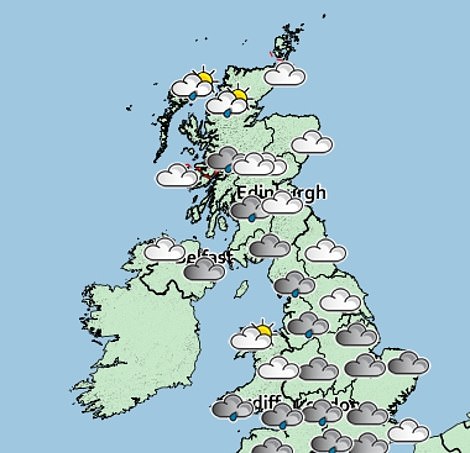 Britain has seen a significant change in conditions in recent days, with parts of the Lake District seeing ten weeks’ worth of rain in 24 hours, with 8.4in (213mm) at Honister Pass setting a provisional new June daily rainfall record.

It follows a sweltering mini-heatwave last week which brought temperatures of at least 88F (31C) for three days a row, peaking at 92.1F (33.4C) in London on June 25, and saw a frenzied rush to beaches on the south coast. 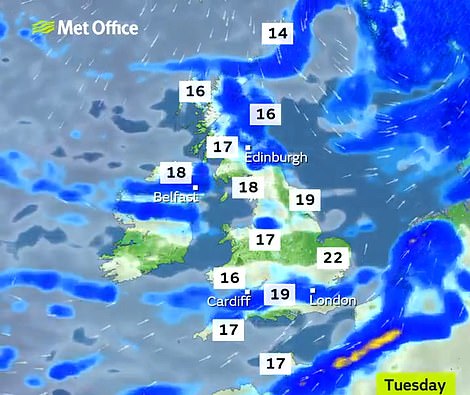 Much of England and Wales experienced rain this morning

Tim Clarke from the Metropolitan Police Federation, that represents officers up to the rank of chief inspector, said he feared this weekend ‘could be anything but a ‘Super Saturday’ for police officers’.

He went on: ‘The challenges they face this weekend with pubs and restaurants reopening and many people predicted to travel across the country to see family and friends will make this weekend perhaps as busy as policing New Year’s Eve.

‘People will be coming out in droves and if we have nice weather again this weekend it will be a significant challenge with the further relaxation of Covid-19 guidance.

‘This could have been mitigated by waiting until Monday to further relax the Government guidelines to us all – but as always, policing and police officers will do the best we can in the challenging circumstances.’

He said: ‘Police officers are right to have concerns about this weekend and Government restrictions being lifted based on our experience of people’s behaviour changing when alcohol is involved. 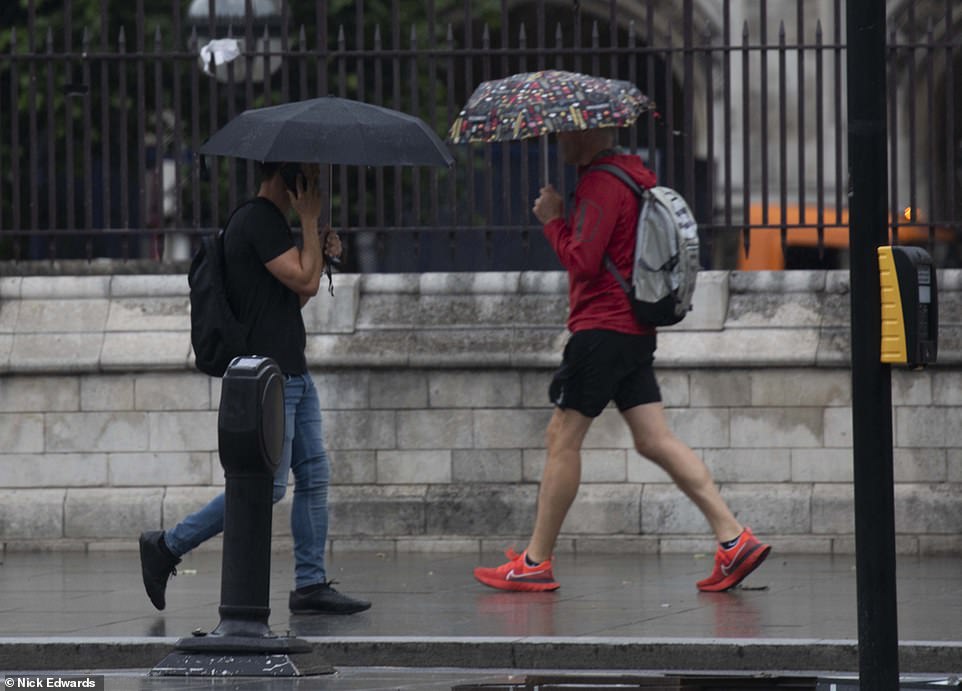 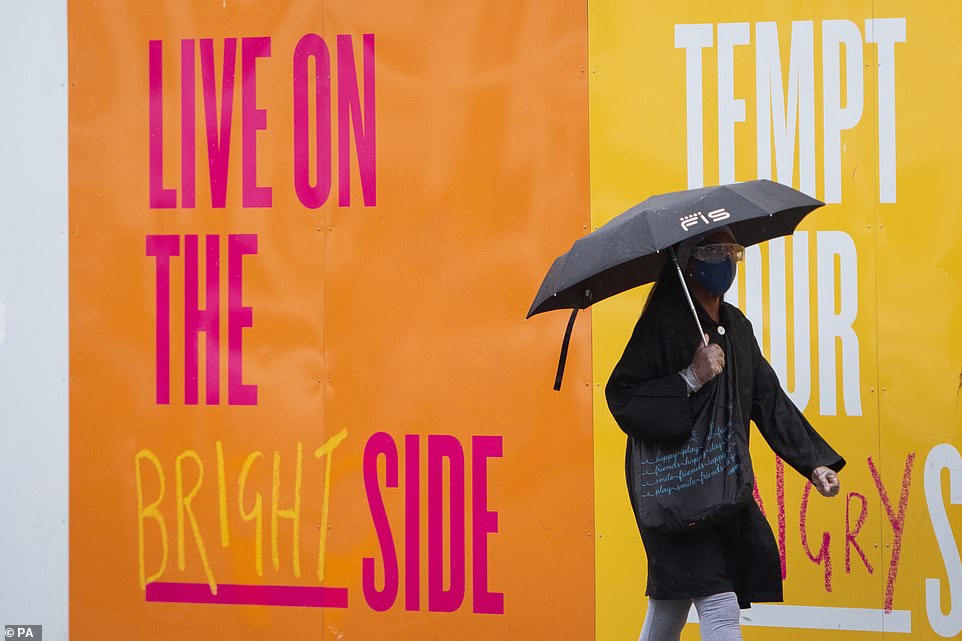 ‘We have more violence, street disorder, sexual assaults, missing people and injured people who may need medical assistance. All of these impose significant strain on policing and our colleagues in the NHS.

‘Having seen the effect of fast food drive-thru outlets in West Yorkshire opening, and some of the public behaviour which followed, my concerns are heightened purely due to alcohol and the issues this brings.

‘Prior to the Covid-19 outbreak, local A&Es on Friday and Saturday nights were at times akin to a circus full of drunken clowns. We do not need this once again.

‘It is known that alcohol lowers inhibitions and I truly hope the vast majority of public maintain their common sense, remembering we are still living under the cloud of Covid.’

Speaking last week during the heatwave, Metropolitan Police Federation chairman Ken Marsh had said of the pubs reopening: ‘If the weather is as it is now when they reopen then we could be in for a real apocalyptic day.’ 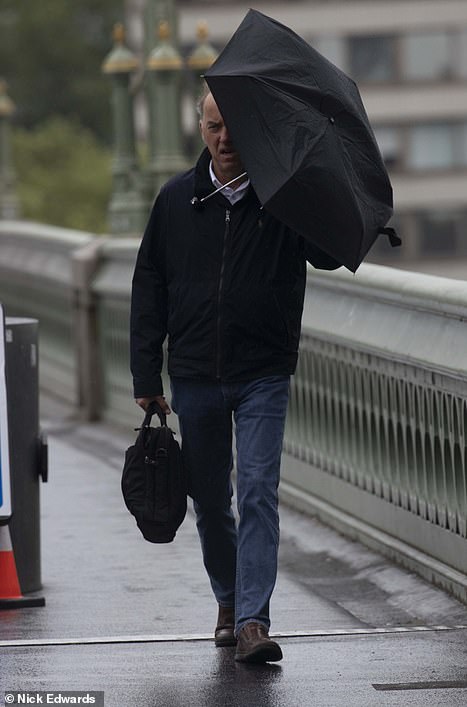 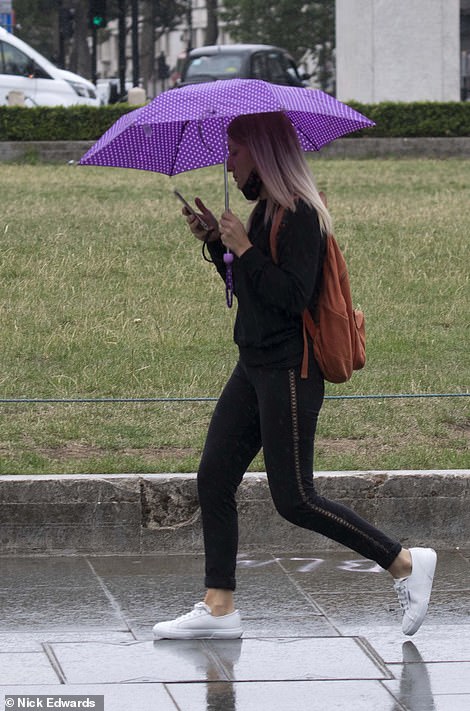 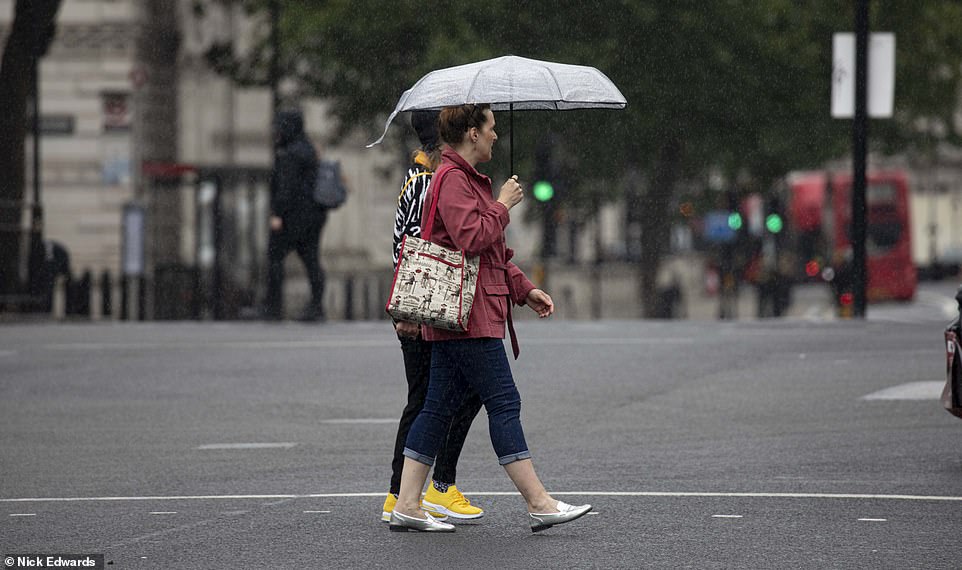 Conditions were dull and cloudy for much of the UK today with some rain in England and Wales, including in London. In Scotland and Northern Ireland there was a mixture of sunny spells, showers and thundery rain.

This evening there will be patchy rain in Northern Ireland, Wales and southern England, along with sunny spells in southern Scotland and parts of central and northern England, although winds will be gentle.

Cloud and widespread light rain will arrive tomorrow morning, but heavy rain is likely in South East England and eastern and central Scotland before sunny intervals and showers develop in southern England later.

Thursday will be generally dry and cloudy but there will be showers in Northern Ireland, Wales and southern England with gentle winds, while on Friday outbreaks of heavy rain will sweep eastwards across the country.

The Met Office outlook for this weekend said it ‘looks unsettled with showers or longer spells of rain, heaviest and most frequent for some western areas’. 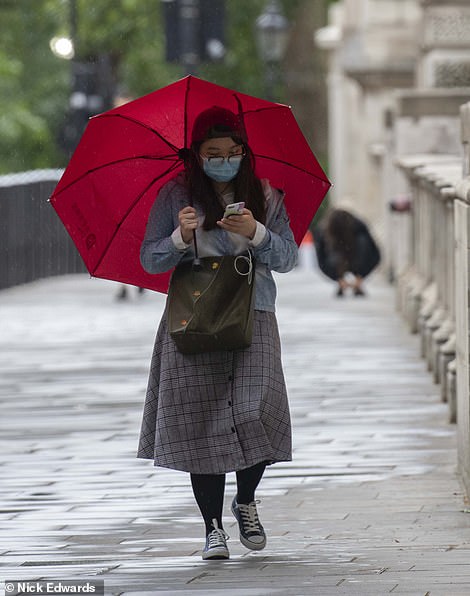 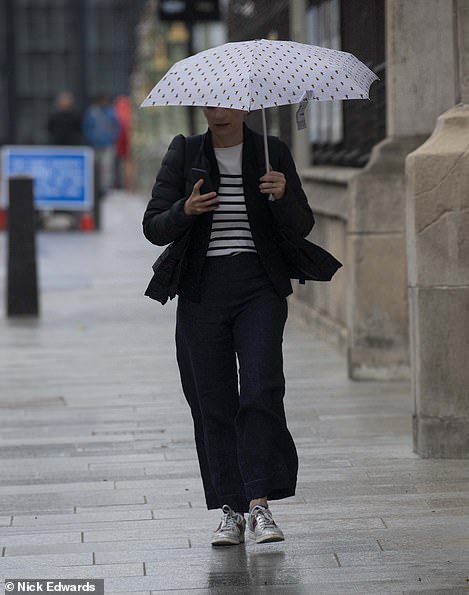 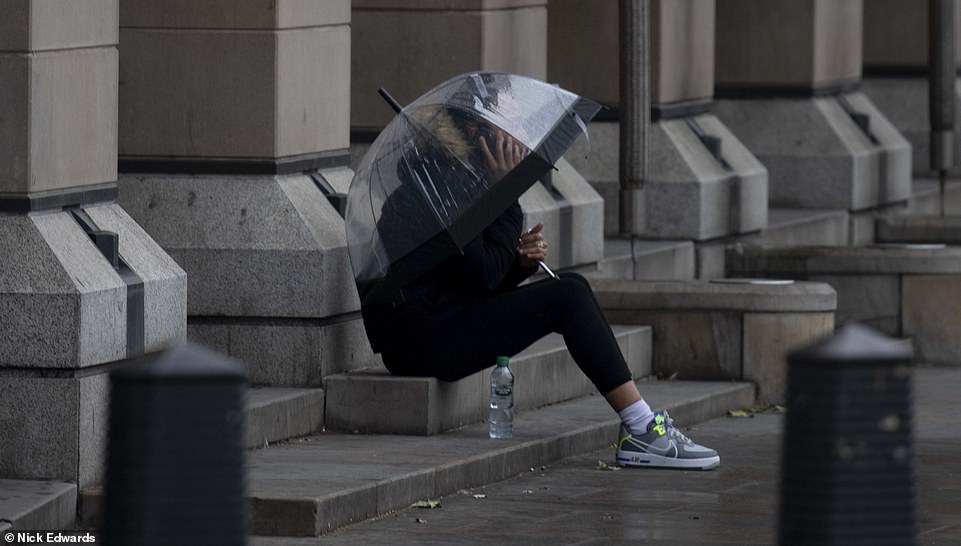 The forecast added: ‘Strong winds look set to accompany these wet conditions, again strongest in the west. Temperatures will vary around average for the time of year though the west will be mainly rather cool.

‘There will, however, still be some drier and sunny interludes. Changeable weather will probably continue in the second week of July although the rain may become more confined to the west and northwest with the best of any drier, brighter weather more likely across the south and east of the UK.

‘Into the following weekend there are signs that the weather may become drier, more settled and warmer again, particularly for southern and many central parts.’

Officials in Bournemouth declared a major incident last Thursday after the seafront was overwhelmed by 500,000 visitors who left 33 tonnes of litter amid illegal camping, littering, drunken fights and gridlock on the roads.