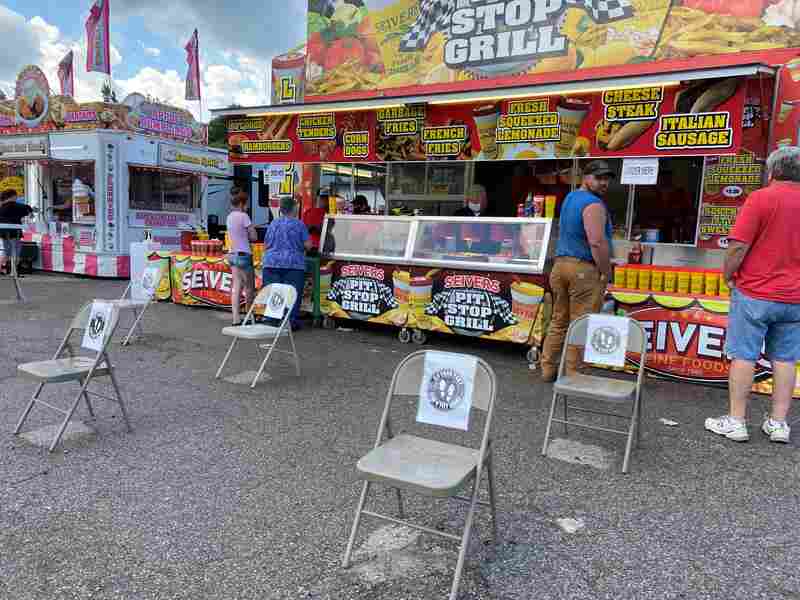 It’s a grim year for fans of summer fairs. The 165th annual Big Butler Fair in Butler County, Pennsylvania, has been called off due to the COVID-19 pandemic. The week of fair games, fried food and barns full of prize-winning animals has been a tradition for Butler County since the American Civil War.

Canceled fairs are an obvious blow to local 4-H and Future Farmers of America clubs who have been training animals for months to compete in livestock shows. But it’s a big hit to food vendors too.

“I mean, we panicked,” Shelby Seivers said. She owns Three Rivers Concessions with her husband Josh. “This is our livelihood. We don’t have [other] jobs that we go back to.”

The season starts in January for the Seivers. They head to Florida and other southern states to set up trailers at events all over the East Coast. “We run concessions 9 or 10 months out of the year,” she said. But summer fairs in Western Pennsylvania are the busiest time of the year. The financial hit could permanently harm the business.

In May, the Seivers decided to set up a stand in Grove City, PA, near their headquarters. They saw lines out to the street for weeks. That inspired them to team up with two other vendor groups to plan a, “fairless food tour.” Boyers Ice Cream and John the Greek Food Concessions are also family-run businesses.

Their first stop was about a mile from the Big Butler Fairgrounds. A few social media posts was all it took to get hungry people to stop along the side of state Route 422 for corn dogs, lemonades, sausage sandwiches and funnel cakes.

Workers wear cloth masks, hand sanitizer stations are set up next to the condiments and social distancing is encouraged while waiting in line.

Seivers said she’s used to reconnecting with repeat customers at the fair every year, but she got emotional when they started showing up at the roadside set up. “They told, like, all the other people that they know that always come and get sausage,” she said. “We have honestly gotten to see so many of the familiar faces that we see at the fairs and it’s been so wonderful.”

Jason Rice and Chris Worst came out to the food tour during a lunch break. Both men said they saw the trailers while passing by and decided to pay a visit. Rice said the gyro he ordered was a nice consolation in place of the fair –something he and his family have attended for more than 30 years.

Jamil Williams, Kaitlyn Norris, and Abby and Carl Saviano shared a picnic table. The couples didn’t know each other, but the taste of freshly squeezed lemonade, corn dogs, and Philly cheese steaks made for good conversation as they chatted over their meals.

Stories like that make Shelby Seivers smile. She says the three families will set up their five food trailers wherever they can fit this summer.

“All three of us are traveling together and we’re just going to hit as many places as we can. We’ve had a lot of people approach us that have parking lots or businesses that have an area big enough for all of us to set up in,” Seivers said.