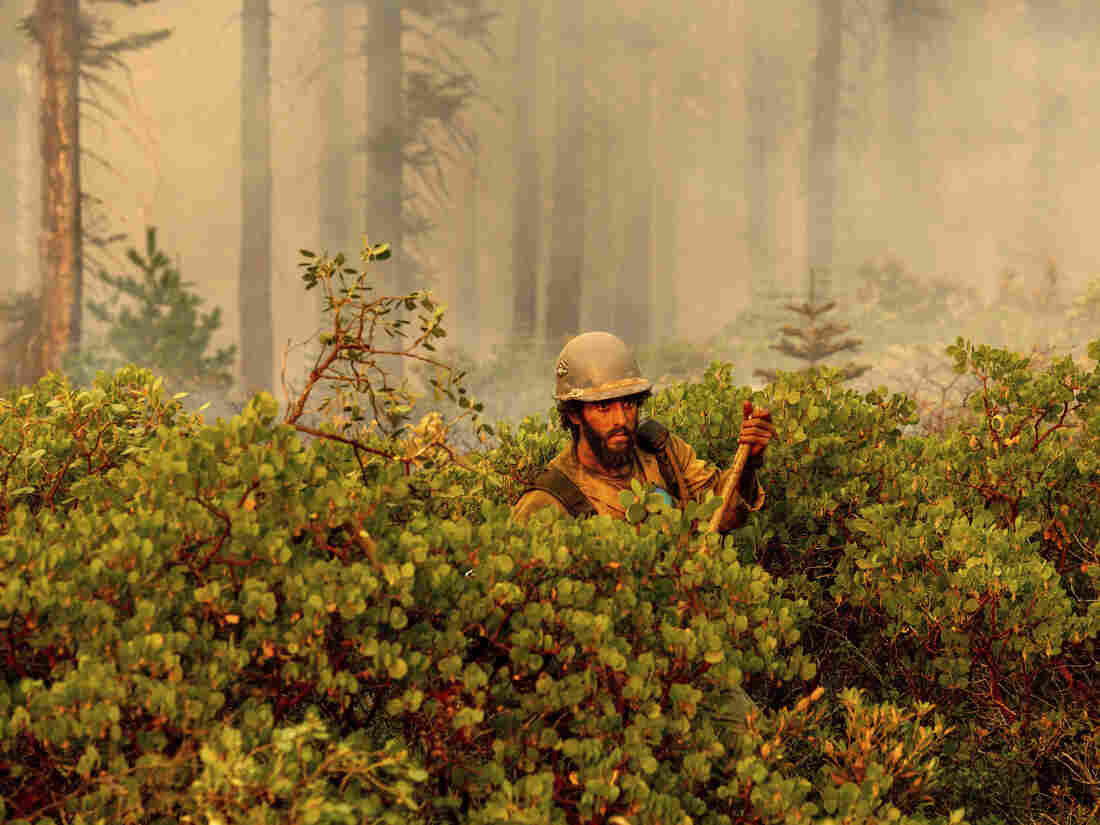 Wildfires in the Western U.S. continue to blaze, with much of the activity centered in California, Idaho, Oregon and Washington.

In Oregon and Washington, 28 large fires are burning across 1.5 million acres. But the Bureau of Land Management noted that for a number of the major fires, their growth has slowed. The large Beachie Creek Fire east of Salem, Ore., had recorded no new growth in the previous day.

About 8,500 firefighters have been deployed in the two states, but smoky conditions have hindered the use of aircraft or helicopters to fight the blazes.

Rain should help the effort to contain the fires, though major precipitation isn’t expected. Showers are forecast in northwest Oregon and along the Cascades, and the increase in relative humidity should improve conditions, according to the National Interagency Fire Center. 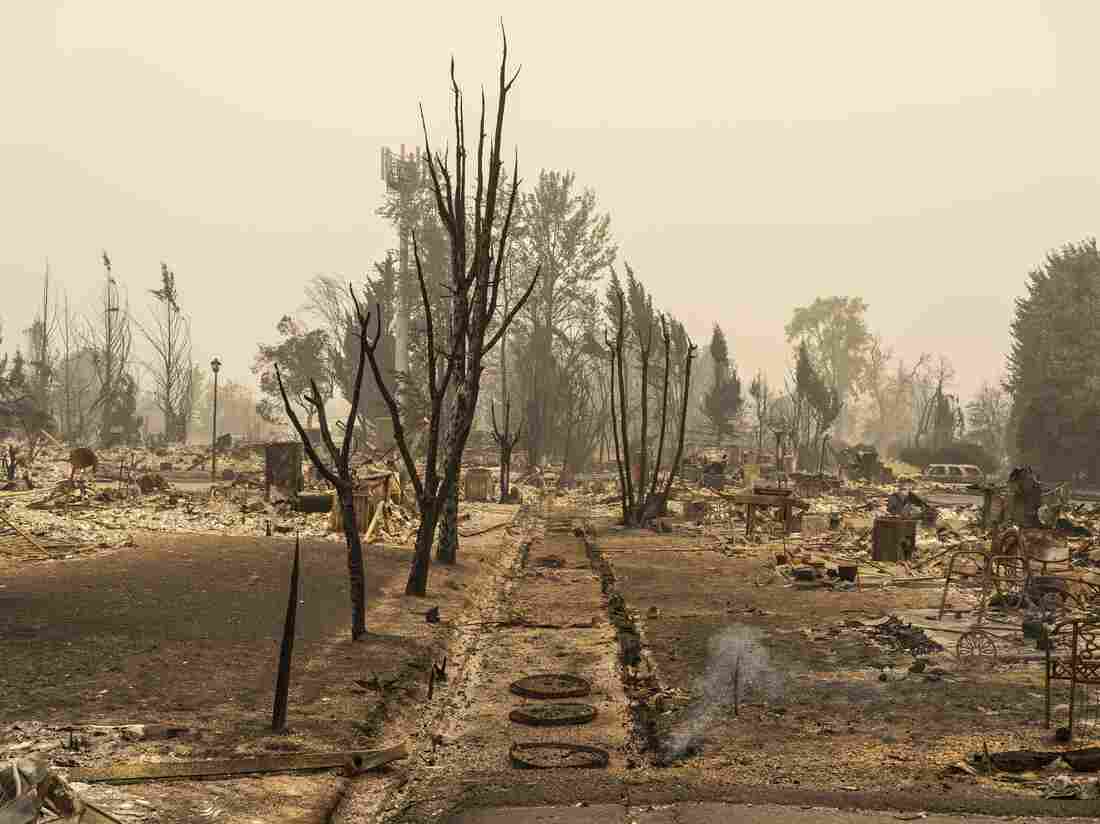 Smoke rises from the ground in a neighborhood destroyed by wildfire on Sunday in Talent, Ore. Hundreds of homes in Talent and nearby towns have been lost due to wildfire. David Ryder/Getty Images hide caption

But critically dry conditions are expected to continue across eastern Oregon, California, Nevada and western Montana, joined by gusty winds.

Alaska Airlines temporarily suspended its flights in Portland, Ore., and Spokane, Wash., due to wildfire smoke.

A haze from the fires drifted across much of the U.S., and was noticeable in New York City and Washington, D.C.

Notice that hazy, milky sky this morning? That is a result of smoke (well above our heads) from wildfires across the Western US. Notice that the smoke originates across the west and then gets pulled to the east due to the jet stream aloft. The haziness may increase later today. pic.twitter.com/wBOQHfpcmM

In California, over 16,600 firefighters are battling 25 major wildfires. Wildfires have burned over 3.2 million acres in the state since the beginning of the year. Fire activity in the state increased in mid-August, and have caused 25 deaths and destroyed more than 4,200 structures, according to CalFire.

The August Complex fire, which started nearly a month ago, has burned through more than 755,000 acres in Mendocino and Humboldt County. It’s now 30% contained. 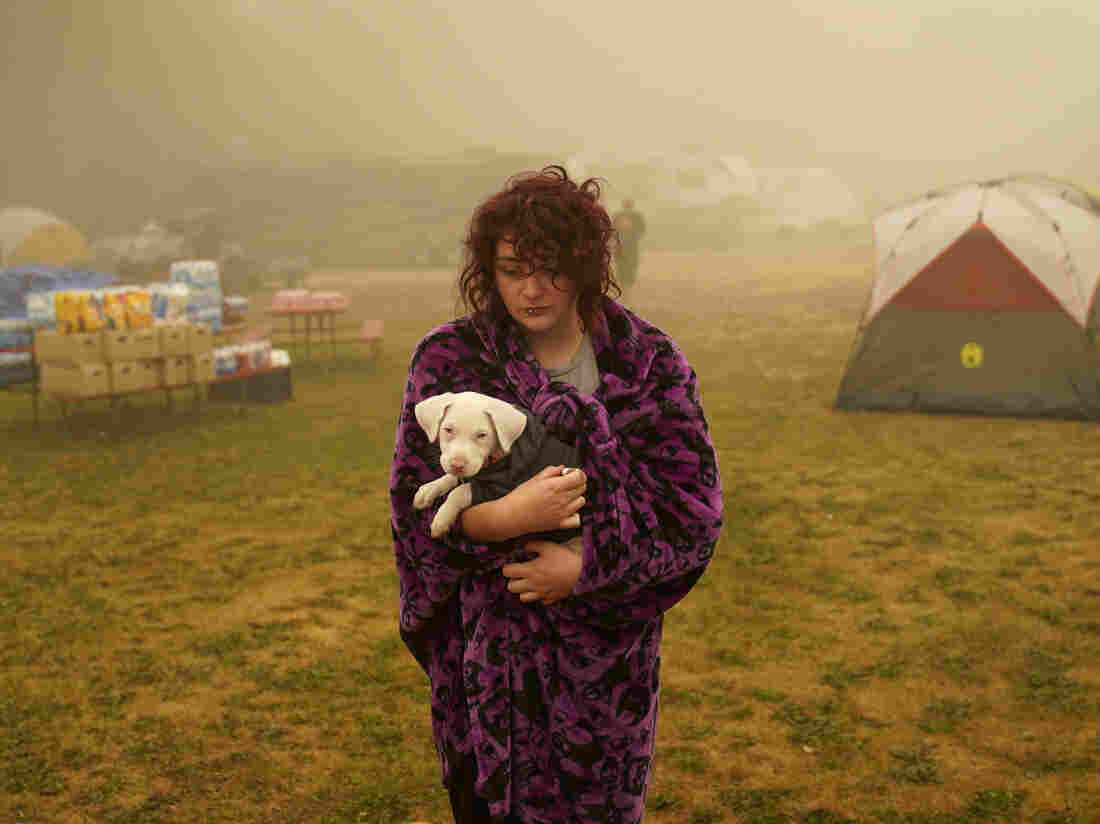 Shayanne Summers holds her dog Toph after several days of staying in a tent at an evacuation center at the Milwaukie Portland Elks Lodge on Sunday in Oak Grove, Ore. “It’s nice enough here you could almost think of this as camping and forget everything else, almost,” said Summers about staying at the center, after evacuating from near the town of Molalla. John Locher/AP hide caption

Scientists have linked an increasing prevalence and intensity of wildfires to climate change, and residents of Western states are grappling with the dread that severe fire seasons are the new normal.

Five of the largest wildfires in California history have occurred this year.

Wildfire smoke can irritate lungs, cause inflammation, affect the immune system, and increase the possibility of lung infections including the virus that causes COVID-19, the Centers for Disease Control cautions.

Instead, it suggested: “Stay inside and close windows and doors. If you’re running an air conditioner, keep the fresh-air intake closed and clean the filter to prevent outdoor smoke from getting inside.”