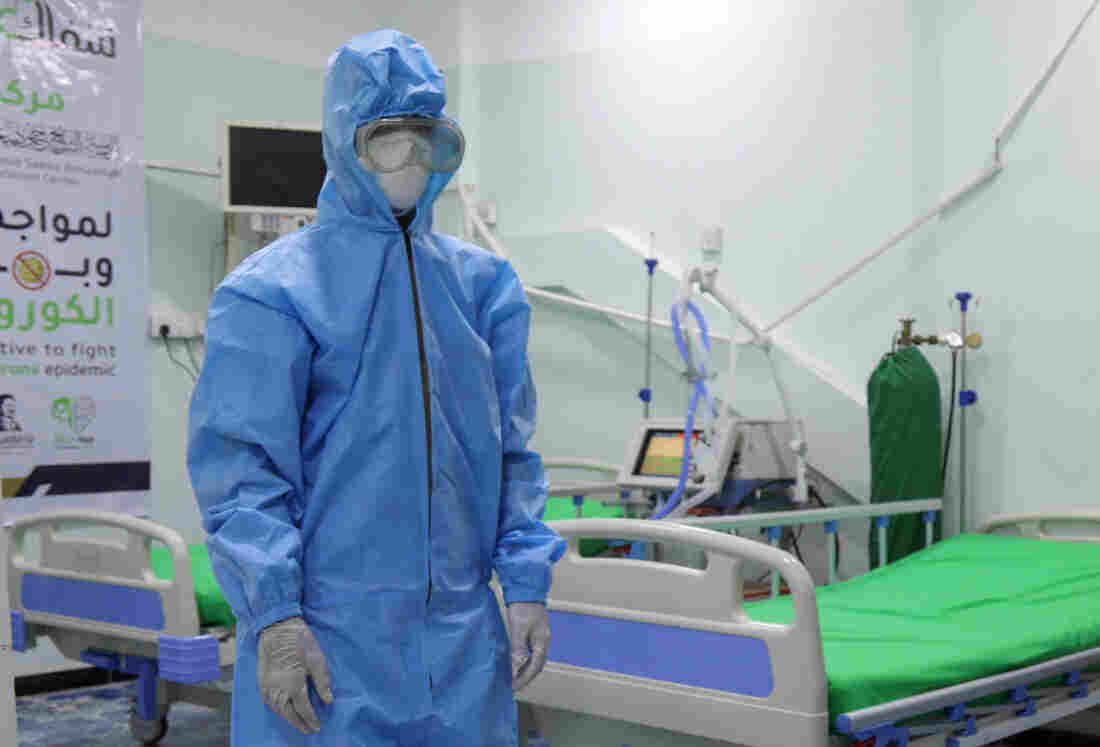 That’s what a family member of a COVID-19 patient told a general practitioner at a private hospital in Aden, Yemen, amid the country’s coronavirus outbreak in April.

Pointing a gun at the doctor, the family member pushed him to put the patient on oxygen and mechanical ventilation, two types of treatments for severe cases of COVID-19.

The doctor explained that he wouldn’t be able to provide those options for the patient.

“We have a shortage of medical equipment,” says the doctor recalling the incident. “We even have to buy our own personal protective equipment.”

But the family member didn’t understand and kept pushing, the doctor says. “He said, ‘Why? You want to kill my patient?’ “

The doctor tried to calm the family member down and promised to do everything he could to help the patient. (He asked that his name be withheld to protect his identity. Health workers continue to receive threats in Yemen.)

Death threats, intimidation and violence are a part of the Yemeni doctor’s daily reality as a health worker on the frontlines of COVID-19 in Yemen, where there have been at least 992 confirmed coronavirus cases as of June 22. The danger he faces is part of a larger trend of attacks on health workers worldwide.

According to Insecurity Insight, a research group that documents violence to aid workers, there have been over 400 reported global incidents of COVID-19-related violence affecting health care workers and facilities since January.

Insecurity Insight tracks attacks on health workers, including threats, assault, arrests and detention, kidnappings and conflict-related violence, along with a number of other types of attacks. Its researchers comb through incident reports from WHO and groups such as the Aid Worker Security Database and Physicians for Human Rights along with media reports.

However, their data is “considerably understated,” says Leonard Rubenstein, chair of the Safeguarding Health in Conflict Coalition and the director of Johns Hopkins University’s health, conflict and human rights program. While Insecurity Insight is a member of the Coalition, he did not work on the report.

“In almost all circumstances, the reliance on reporting by health facility operators tends to result in severe under-reporting as they are too busy to report or see no advantage in taking the time to do so,” he adds.

Still, Rubenstein says he is “confident” in the report’s data — and that it gives a good idea of what is happening at the moment.

“In the early weeks of the pandemic, a lot of the events were triggered by a fear of infection actually spreading,” says Christina Wille, a founding member of Insecurity Insight. On April 23 in Mexico, for example, two women were arrested for beating a health worker at a bus stop, accusing her of being infected with COVID-19 and putting others at risk. It’s part of an uptick in attacks on doctors, nurses, ambulance drivers, Red Cross staff and other health workers in Mexico — people see them as “potential sources of infection,” said Jordi Raich, head of the ICRC regional delegation for Mexico and Central America in a statement.

The measures to control the pandemic have created new reasons for people to attack health workers, says Wille. Some people, terrified by being quarantined in an official facility, have used force to get themselves out of it. In Herat, Afghanistan, on March 16, for example, 38 patients at a health facility for two weeks fled early by breaking windows and attacking hospital staff.

“In the context of COVID-19, we are seeing more attacks by community members who do not normally figure among the perpetrators in our normal monitoring,” she says.

Patients and their family members are not the only perpetrators. A police officer attacked an ambulance driver on March 26 in Burkina Faso for not complying with an imposed COVID-19 curfew.

Insecurity Insight also says that violence from existing conflicts has taken a toll on efforts by health-care groups to control COVID-19. On April 6, for example, armed groups heavily shelled the Al-Khadra Hospital in Tripoli, Libya. With 400 hospital beds, it was one of the only health facilities in the country to treat COVID-19 patients.

The type of threat that the Yemeni doctor experienced at his hospital is unfortunately “quite typical” around the world, says Wille.

The doctor estimates that at his hospital in Aden, a family member of a patient threatens a health worker with a gun or some kind of violence about three times a week.

Rayan Koteiche, a researcher with the group Physicians for Human Rights, which focusing on the Middle East and North Africa region, could not verify the doctor’s account but says his group has corroborated the widespread use of guns to threaten health workers in Yemen.

“We’ve documented such incidents where family members, acquaintances, friends or colleagues of patients take it upon themselves to pressure, intimidate, threaten health workers to do more,” he says.

Flashing a gun is not uncommon, he says: The proliferation of small arms in Yemen has been an issue for years and it’s not uncommon for civilians to carry “handguns, machine guns, automatic weapons — they are very widespread.”

Even before the pandemic, Yemen was a particularly dangerous place for health workers. Between March 2014 and December 2018, warring parties in the ongoing civil war carried out at least 120 violent attacks on medical facilities and health workers, according to a report co-authored by Koteiche titled “‘I Ripped the IV Out and Started Running’: Attacks on Health Care in Yemen.”

The Yemeni doctor says some of his colleagues at the hospital have stopped working because they fear for their life. He fears for his life, too.

When he was threatened back in April, the first thing he thought about was his two children and wife: “I felt sad. What will they do if I get killed?”

Still, he continues his work. “We have to help people. We have to save lives,” he says.

When asked if he had any special techniques or magical phrases to say to people who intimidate or threaten him on the job, the doctor says he just tries his best to de-escalate the problem. He tells them: “Pointing a gun won’t help. It frightens the staff, it confuses them.”

Health workers around the world are calling for more security measures to protect them while working.

Dr. Amara Khalid is a medical officer at the COVID-19 ward at Mayo Hospital, Lahore, Pakistan. On May 21, she wrote in a Facebook post that she and her husband were mobbed by about 25 people while working on the overnight shift at the hospital. They were “shouting that their patient was sick and doctors should check her ASAP,” she wrote. With no security at the hospital, she and five workers were left to fend for themselves, trying to prevent the mob from entering the COVID-19 ward, then barricading themselves to call for help.

Khalid is now working with a lawyer and petitioning the Lahore High Court to provide security provisions to health workers. “It’s high time to do this, and it’ll only be possible if we all unite for this cause,” she wrote in an Instagram post aimed to Pakistani doctors.

“When we were attacked, I got really scared and even thought about leaving the job,” says Khalid. “But there’s already a shortage of doctors. And if there are no doctors in the hospital, then the chaos will increase. So somebody has to be there. Somebody has to sacrifice.”

With reporting from NPR correspondent Diaa Hadid in Pakistan.