Boris Johnson‘s sparked fury today by announcing shielding restrictions will still be lifted for thousands of vulnerable people tomorrow – despite slamming on the brakes and delaying the reopening of the economy because of a spike in cases.

The Prime Minister said leisure and entertainment venues and beauty salons won’t be allowed to open tomorrow as initially planned, and they will have to shut their doors for another fortnight.

But he also said the national pause on shielding – which would have seen 2.2million ‘clinically extremely vulnerable’ people in England no longer told to avoid public indoor places and be allowed back to work – would ‘proceed as planned’.

Medics questioned how it could be safe for at-risk people, such as cancer patients or those on immune suppressing drugs, to return to work but not ‘go bowling or ice-skating’.

They have spent the past four months cooped up indoors with minimal interactions with loved ones because they are at a significant risk of dying or becoming seriously ill if they catch the coronavirus.

Trade unions said today the virus ‘still remains a threat’ to shielded people who must not be forced to return to work tomorrow.

The delay to the reopening of the economy came in a bid to stem rising infections in England, which minister fear will leave to a second wave. Official data revealed cases have doubled since June. 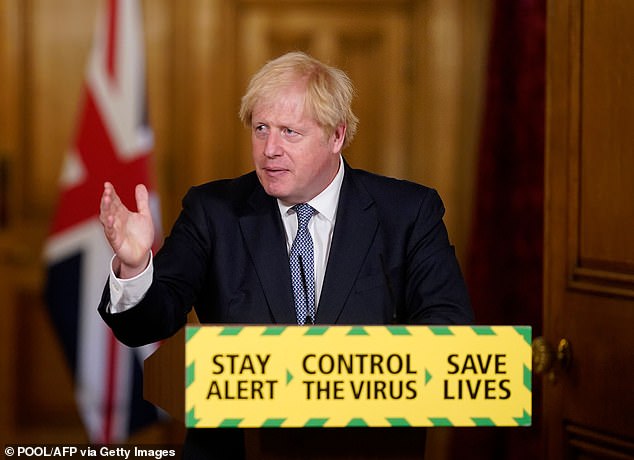 Mr Johnson said at a press briefing today: ‘I also said that we would pause shielding nationally from August 1, based on clinical advice and that national pause will proceed as planned, and our medical experts will be explaining more about that decision and about the shielded group later.’

Many had hoped the briefing would give clearer instructions, but these are now expected later.

Writing on Twitter, Ms Clarke said: ‘If rising infection rates mean it is no longer safe to go bowling or ice-skating, how can it *possibly* be safe for those who are shielding to return to work, @BorisJohnson?

‘It is so easy to forget those on immunosuppression, chemotherapy, with type 1 diabetes, transplanted organs, autoimmune diseases etc. They are exceptionally vulnerable and their protection matters more than economics. Or don’t you agree, @BorisJohnson?’

UP TO 80% OF THOSE SHIELDING WILL NOT STOP TOMORROW

Up to 80 per cent of people who are shielding will not stop tomorrow, a survey has found.

They found that 42 per cent plan to continue shielding after the 1 August and 40 per cent are undecided.

When asked how long they will continue to shield for, two thirds said they will need to be happy the risk of catching coronavirus is low, with 21 per cent saying they will wait until there is a vaccine.

The majority also feel that shielding and lockdown has been lifted too soon with 78 per cent saying they think the government in England has been too quick to lift shielding restrictions.

And four in five feel very anxious about shielding lifting.

For some shielders who plan to pause shielding in line with national guidance, it will be their first time outside of the house for months.

Some 21 per cent of respondents have not left their home during the shielding period. A further 10 per cent had only left the house once in a month.

Nearly half of people who had already stopped shielding said the reasons they had to stop were out of their hands and they did not choose to, for example because of work commitments. And 39 per cent noted they’d stopped shielding because the burden of shielding was proving too high.

The leading respiratory charities have heard first-hand from thousands of people whose lives have been turned upside down by shielding. For many it’s been extremely isolating and difficult and the charities fear those who want to remain shielding are at risk of being forgotten.

Pausing shielding also means many very vulnerable people will be returning to normal day-to-day life and the charities are urging the public and those shielding to continue to follow stringent social distancing. Not all health conditions are visible so its vital everyone takes care to protect the health of those around them.

She told MailOnline: ‘Rates of infection are rising so there is understandable anxiety from patients and doctors alike about ending shielding for those who are most vulnerable.

‘However, there are other medical and psychological consequences of not ending the shielding that also need consideration. The social isolation and loneliness is really problematic. We are seeing a lot of mental health problems as a consequence of the lockdown.

‘However, if the infection rates continue to rise as they are doing, I will be advising my patients to work remotely wherever possible.’

From 1 August, people in England who are at high risk from coronavirus will no longer be advised to shield and instead return to normal life. They government will no longer pay them statutory sick pay.

Government guidance states that shielding will be paused from 31 July in Scotland and Northern Ireland, and from 16 August in Wales.

The ‘pause’ on shielding is so that it can be resumed again if necessary.

From tomorrow the clinically vulnerable can go back to work, as long as it is Covid-19 secure, go to buy food at the supermarket and exercise outdoors – all of which have not been possible for millions of people.

Only clinically extremely vulnerable people who live in Blackburn with Darwen in the North West and other hard-hit areas across England.

The Trades Union Congress (TUC), representing the majority of unions in England and Wales, has said it would be ‘heartless and reckless’ for employers to demand the immediate return of shielding workers on 1 August.

‘With infections rising the government needs to do far more to reassure workers they will be safe as shielding is paused and offices reopen.

‘That means requiring employers to carry out and publish proper risk assessments. And it means urging bosses not to recklessly force staff into workplaces for the sake of presenteeism.’

The TUC said workers may face demands from their employers to return to workplaces.

‘The TUC is concerned that tens of thousands of people who have been shielding – especially older workers and those with ill health – may not yet be able to go back to workplaces safely,’ it said.

The TUC has called on the government to extend the job retention scheme for circumstances where support is needed beyond October.

Ms O’Grady said: ‘We all want people to return to workplaces as soon as possible.

‘But the virus remains a threat to shielding workers. And we may see further outbreaks that require local lockdowns.

‘It would be heartless and reckless for employers to demand the immediate return of shielding workers.’

A slight change in lockdown rules for those shielding first came on July 6, when they were told they could form a support bubble and were granted the freedom to meet in a group of six people outdoors.

The government said a drop in coronavirus cases allowed for a relaxation at the start of July.

However, there has been a worrying upward trend in cases in the past few weeks since then.

Coronavirus cases in England are now at the highest levels since May, according to the Office for National Statistics (ONS).

The organisation make weekly estimations of cases in the community – not including care homes and hospitals – and warned today there is ‘now enough evidence’ to prove Covid-19 infections are on the up.

ONS calculates 4,200 people are catching the virus each day in England alone, which is double the figure since the end up June.

On top of this, government scientists say they are ‘no longer confident’ the crucial R rate is below the dreaded level of one.

It is vital to keep the ‘R number’ – how many people someone with Covid-19 is likely to spread the virus to – below one to stop the virus spreading rapidly.

Mr Johnson said casinos, bowling alleys and close contact services like beauticians has now been pushed back to August 15 ‘at the earliest’.

Loosening rules to allow wedding receptions of up to 30 people and a pilot scheme of bringing crowds back to sports venues have also been delayed.

The mandatory wearing of face coverings will be extended in England to include galleries, cinemas and places of worship.

And there will also now be a ‘greater police presence’ to ensure people wear masks and comply with social distancing.

Commenting on the announcement, Professor Keith Neal, an emeritus professor of the epidemiology of infectious diseases, University of Nottingham, said: ‘I would advise anyone shielding who is worried to have a conversation with the doctor caring for them for that condition.

‘We are now at a stage where people need to take individual decisions.’