A businessman who dobbed in two young kids for running a makeshift drinks stall in Melbourne has been blasted after sharing a photo of the boys online.

The man tweeted a photo of the kids sitting behind a table made from an ironing board filled with soft drink cans and lollies near the Yarra Trail walking track over the weekend.

He suggested the local council send officers down to the park to tell off the kids for breaching Stage Four coronavirus restrictions.

But he was quickly met with a barrage of abuse online from other Melburnians and has now deleted his Twitter account. 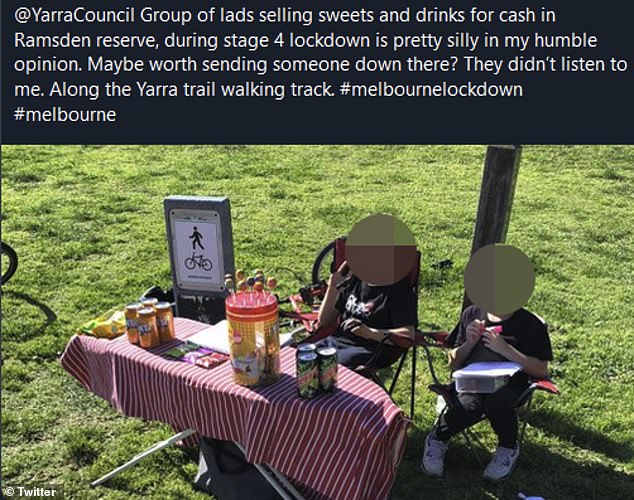 ‘Group of lads selling sweets and drinks for cash in Ramsden Reserve, during stage four lockdown is pretty silly in my humble opinion,’ he said in the post, which tagged the Yarra Council.

‘Maybe worth sending someone down there? They didn’t listen to me. Along the Yarra Trail walking track.’

The tweet was immediately flooded with responses slamming the man for calling out the ‘innocent’ children.

‘A grown man dobbing on a couple of kids for doing something completely harmless and posting their photo online is pretty silly in my humble opinion,’ one tweeted.

‘We’ve taken away a year of their childhood, they are out doing something as innocent as this – and you’d like to see the police go and talk to them,’ another said.

‘You are a miserable excuse for a human being! If you want to live under a tyrannical government, move to China!’ wrote a third.

‘What a bully you are!! Picking on kids that aren’t locked up! Hang your head in shame!!!!’ someone tweeted.

Others also pointed out the fact he had recently shared photos at the Black Lives Matter protest saying he was in ‘solidarity’ with the tens of thousands who turned up.

He also shared a photo of a Mr Whippy ice-cream truck in April, asking Premier Daniel Andrews if people were allowed to gather together and buy a snack.

‘Curious to know if this is OK in the current climate?’ he wrote.

‘Promoting little clusters of people and handing out without gloves or a mask.’

The children’s stall was alerted to the police by the Yarra Council who then reported it to the Department of Health and Human Services.

The DHHS said while they appreciated the boys’ ‘entrepreneurial endeavours’, food stalls were against current COVID-19 restrictions.