Health Secretary Matt Hancock has been accused of setting a poor example on social distancing after it was claimed he was surrounded by staff during video calls with NHS chiefs.

Mr Hancock is alleged to have had between ten and 20 Department of Health and Social Care officials in his Whitehall office during the calls which are taking place every day.

NHS leaders suggested the approach apparently taken by Mr Hancock was not in line with government advice for everyone to work at home if they possibly can.

They said it appeared as if Mr Hancock and his staff viewed social distancing rules as being ‘for other people’. 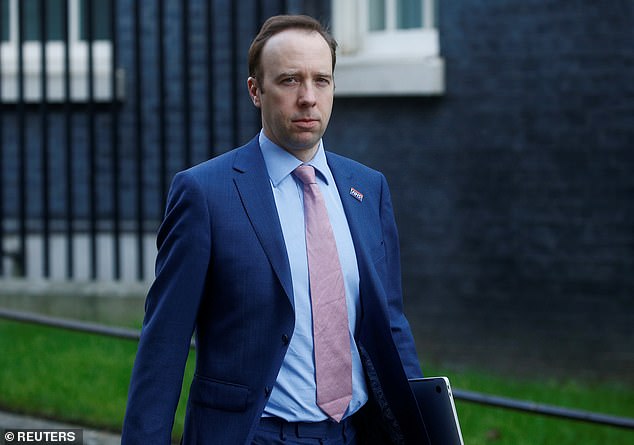 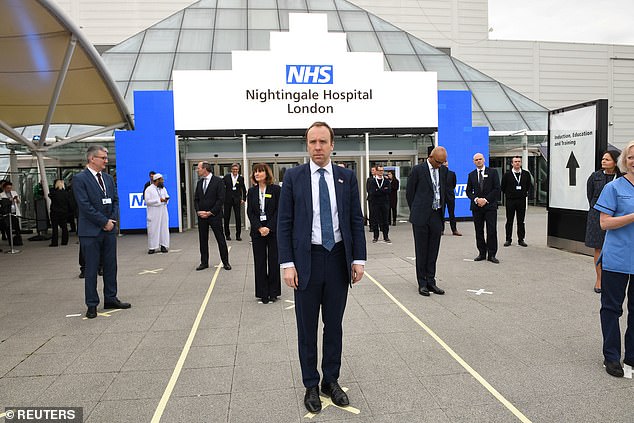 Mr Hancock, pictured at Nightingale Hospital on April 3 demonstrating social distancing, has been one of the government’s most high profile ministers during the coronavirus crisis

A senior NHS leader who has seen the meetings told the Health Service Journal that the approach was effectively ‘encouraging presenteeism’.

It also makes it ‘hard to send the right messages’ to the public about staying at home, they said.

The anonymous senior NHS source said: ‘It looks like the Health Secretary and his colleagues think “social distancing” is for other people and that coming into the office is necessary for senior leaders.’

The government’s official coronavirus guidance states that people should ‘work from home, where possible’ and that ‘your employer should support you to do this’.

It also states that ’employers who have people in their offices or onsite should ensure that employees are able to follow Public Health England guidelines, including, where possible, maintaining a two metre distance from others’.

A Department of Health and Social Care spokeswoman told HSJ: ‘We continue to do everything we can to keep this country safe, including by following all guidance and practising social distancing.’

It is understood that department staff are being encouraged to dial into meetings remotely wherever possible.

Allies of the Health Secretary rubbished suggestions of staff being squeezed into the meetings as they pointed out Mr Hancock has a large office.

Mr Hancock self-isolated for seven days after testing positive for coronavirus, with the Health Secretary returning to work last week.

He described having the disease as ‘like having glass in your throat’.

Mr Hancock has been one of the government’s most high profile ministers during the coronavirus outbreak.

He has chaired numerous Downing Street daily press conferences and won plaudits for the way in which he conducted the one on the day that he formally returned to work after his illness.