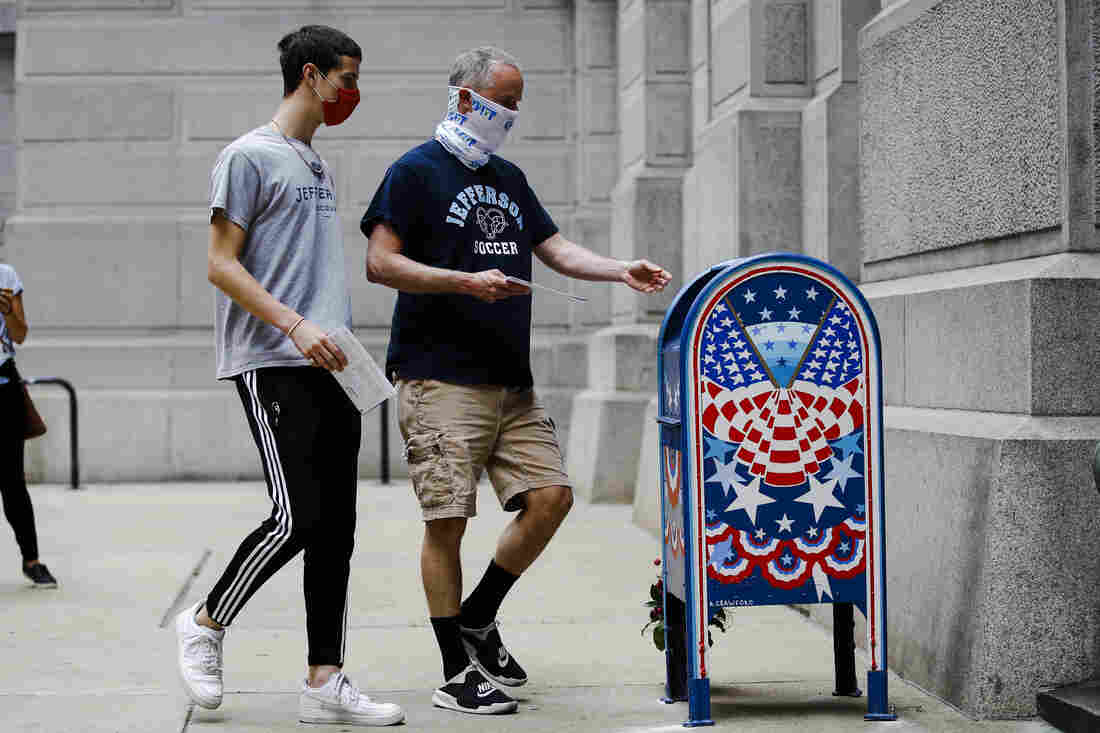 Benjamin Graff, center, and his son Jacob Graff, 19, drop off their mail-in ballots for the Pennsylvania primary election, in Philadelphia, on June 2, 2020. The state Supreme Court affirmed Thursday that counties may use drop boxes for voters casting mail-in ballots. Matt Rourke/AP hide caption

The Pennsylvania Supreme Court handed down several voting-related decisions Thursday that are likely to help Democrats this fall.

The court extended the deadline for accepting mail ballots, will allow voters to submit their ballots through drop boxes and removed the Green Party’s candidate for president from the ballot.

The decisions come less than two months before Election Day and as a flurry of election-related lawsuits continue to pile up around the country.

In dozens of cases, parties, campaigns and other groups are trying to sort questions about voting that have cropped up because of the pandemic. Courts are being asked to clarify murky areas of election law that will be exacerbated by the millions more mail ballots that will be cast this year. The questions include whether a ballot must be received by or postmarked by Election Day, must there be a witness for a mail-in ballot, what standards are being used to judge a voter’s signature and whether drop boxes can be used to return ballots instead of relying on the postal service.

2020 is the first year Pennsylvanians have the option to vote by mail without needing to specify a reason. The Pennsylvania Department of State says nearly two million people have already asked for mail ballots for the upcoming election — and that figure is expected to grow.

“This is a victory that will help ensure that every eligible voter will more easily be able to cast their ballot and have it counted fairly,” Gov. Tom Wolf, a Democrat, wrote in a statement on Thursday.

Mail ballots will now be accepted if they are received by 5 p.m. on the Friday after the election and were either postmarked by Nov. 3 or there is no evidence to suggest they were sent after Election Day. Previously, mail ballots had to be received by 8 p.m. on Election Day.

During the state’s June primary, tens of thousands of ballots arrived after the cutoff due to postal service delays and election officials scrambling to manage the deluge of mail ballots because of the pandemic. The Pennsylvania Democratic Party and the state’s Democratic secretary of state filed suit to extend the deadline.

“While [the timeline] may be feasible under normal conditions, it will unquestionably fail under the strain of COVID-19 and the 2020 presidential election, resulting in the disenfranchisement of voters,” Justice Max Baer, a Democrat, wrote for the majority.

Though the decision will enfranchise more voters — it will also mean that a final vote tally will take longer to certify. Under current Pennsylvania law, clerks cannot begin counting mail ballots until Election Day.

More Democrats are expected to vote by mail than Republicans, in part because President Trump for months has seeded doubts, without any evidence, about the integrity of mail ballots.

The ruling to give the legal green light to drop boxes is another win for the Democrats. The Trump campaign filed a lawsuit in federal court to stop their use — but that case was paused while state courts weighed in.

In other rulings Thursday, the Pennsylvania Supreme Court also upheld a state law that poll watchers must be registered to vote in the county where they’re observing the polls.

And in a win for Republicans, the court blocked people from delivering other voters’ absentee ballots — a practice Democrats call “community collection” and Republicans deem “ballot harvesting.”

On the heels of the decisions, Republicans in the state legislature wrote in a statement that they are exploring legal and legislative options to circumvent the rulings.

“Today’s decision makes Pennsylvania’s elections less secure and opens the door to serious questions about the integrity of the process in one of the most significant national and state elections in recent memory,” Speaker of the House Bryan Cutler and Majority Leader Kerry Benninghoff wrote.

There have already been an estimated 248 pandemic-related election lawsuits this year, and with the election ticking closer, more litigation is likely ahead.