A breakfast radio host who lost her first husband to suicide and second to cancer has revealed why she will not find love again.

Robin Bailey, 50, said she finds the idea and ‘expectation’ of finding a new partner unsettling after losing Sean Pickwell, her second husband, in September last year.

Mr Pickwell, 56, died of terminal liver cancer about two years following his diagnosis and less than a year after the pair married in November 2018.

Ms Bailey said she was now focusing on herself and her children as she was ‘all good’ in the love department.

‘I can’t even tell you the number of people that say to me, “Oh you’ll find someone else,” and it’s like, “Why do I have to?” Celine Dion said it best when she said, “I’m desperately in love with my husband, he’s just not here,” and I’m fine with that,’ she told the Courier Mail. 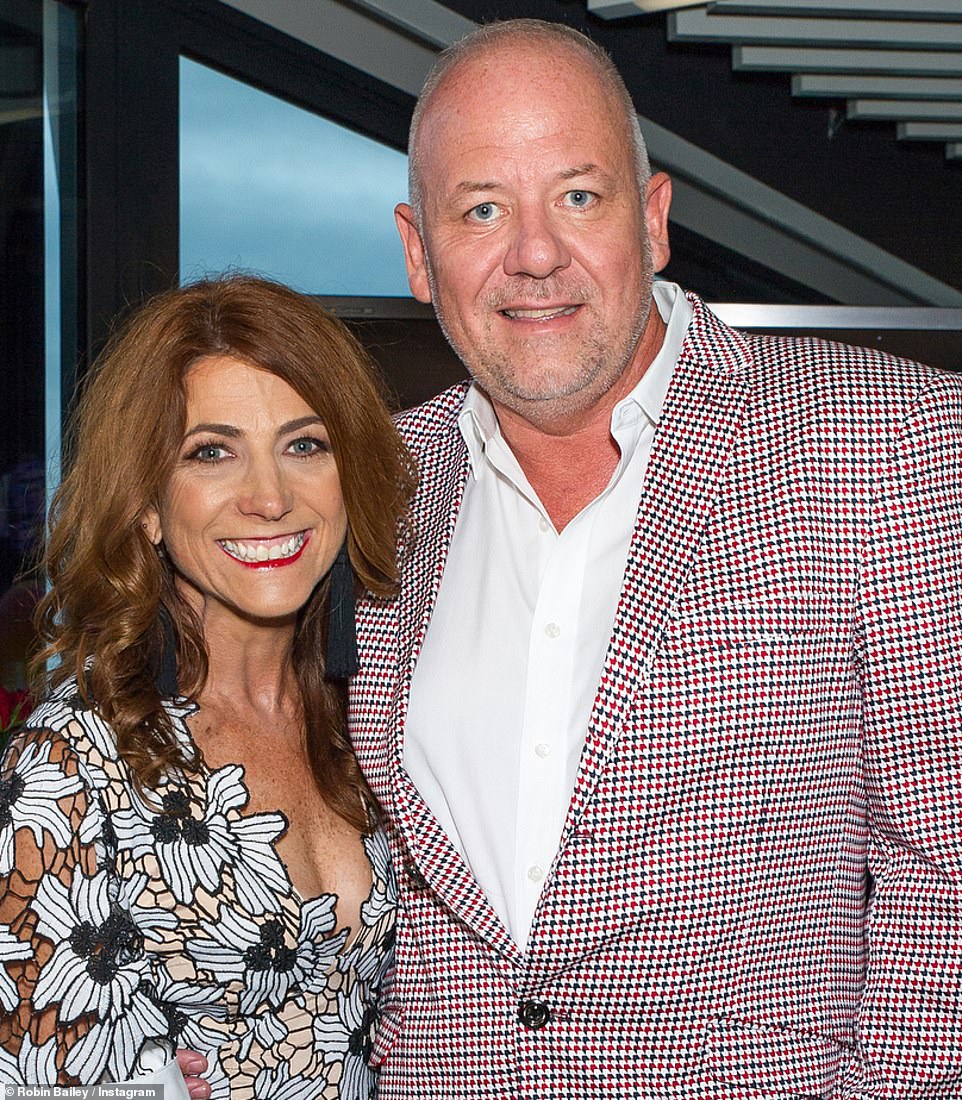 Robin Bailey (pictured) said her second husband, Sean Pickwell (pictured) was her ‘absolute soulmate’. He died of terminal liver cancer about two years after his diagnosis and less than 12 months on from the pair marrying in November 2018 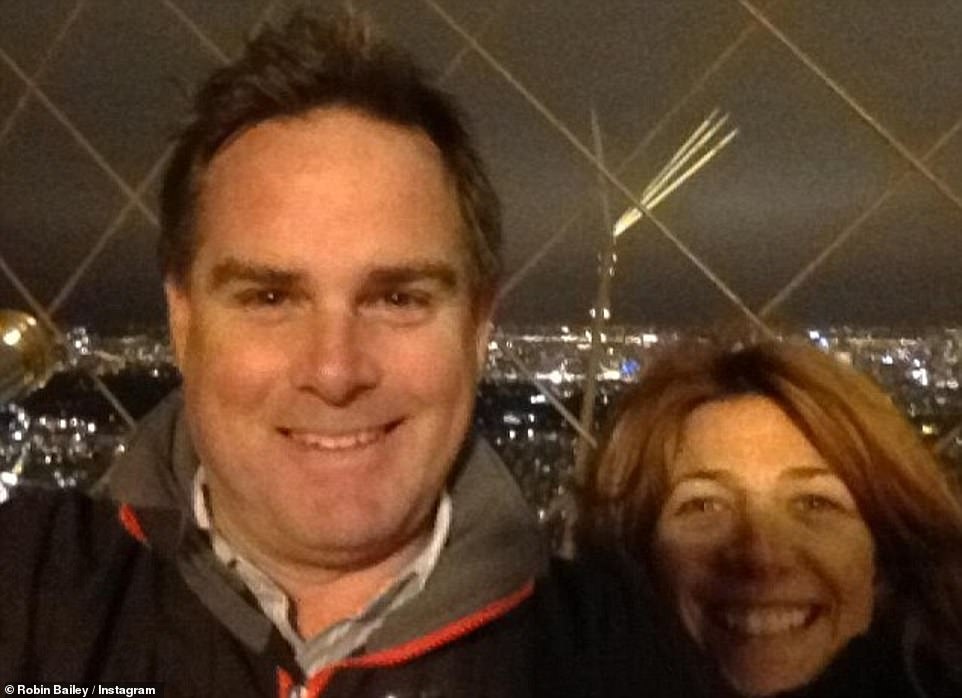 *Liver cancer is one of the top 10 causes of cancer deaths in Australia.

*Men and those over the age of 60 are more likely to get liver cancer.

* The five year survival rate for liver cancer is 19%.

Ms Bailey has been forced to deal with more than her fair share of tragedy after her first husband Tony Smart committed suicide in September 2014 following a long battle with depression.

She was in the process of separating from Mr Smart, her husband of 16 years, when she came home from her breakfast show to find out her life had changed forever.

She describes that tragedy as ‘traumatic’ and says she often use to torture herself about the role she may or may not have played in his death.

Comparing how both her husbands died she said her most recent loss was ‘much more painful’.

Ms Bailey previously told The Sunday Mail she spent a lot of that time searching for a cure for Mr Pickwell’s condition, but the pair eventually accepted the prognosis.

Despite coming to terms with the prospect of his own death, Mr Pickwell ‘had to fight’ for doctors to allow him to stop treatment and return home.

‘That wasn’t living,’ he said at the time. ‘What I’ve been able to do in that acceptance is live even more than I ever have before in my life. I came home and would literally stop every single day and think “I’m so grateful”.’

The couple travelled to Europe and the United States to share as many memories as possible from Mr Pickwell’s bucket list with their blended family, which also included Mr Pickwell’s daughter Ally.

‘What can I say .. my big beautiful panda has gone. He died as he lived … his way ….at home with us holding him…. early this morning,’ she wrote.

‘In this moment there are no words or feelings that can truly express the love and gratitude I have for my husband Sean Pickwell.

‘He came into our lives and healed us . He loved me so hard and taught me so much and now whatever life throws at us we will be stronger, wiser and more fierce because of him . 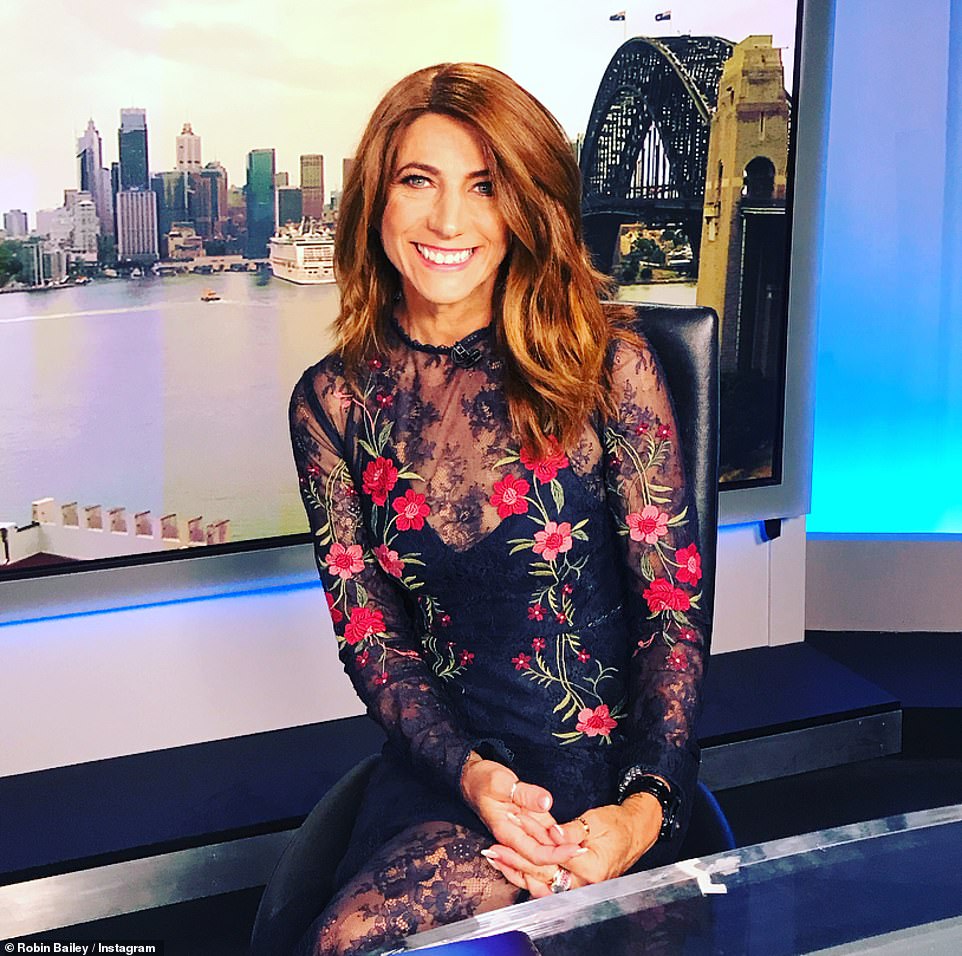 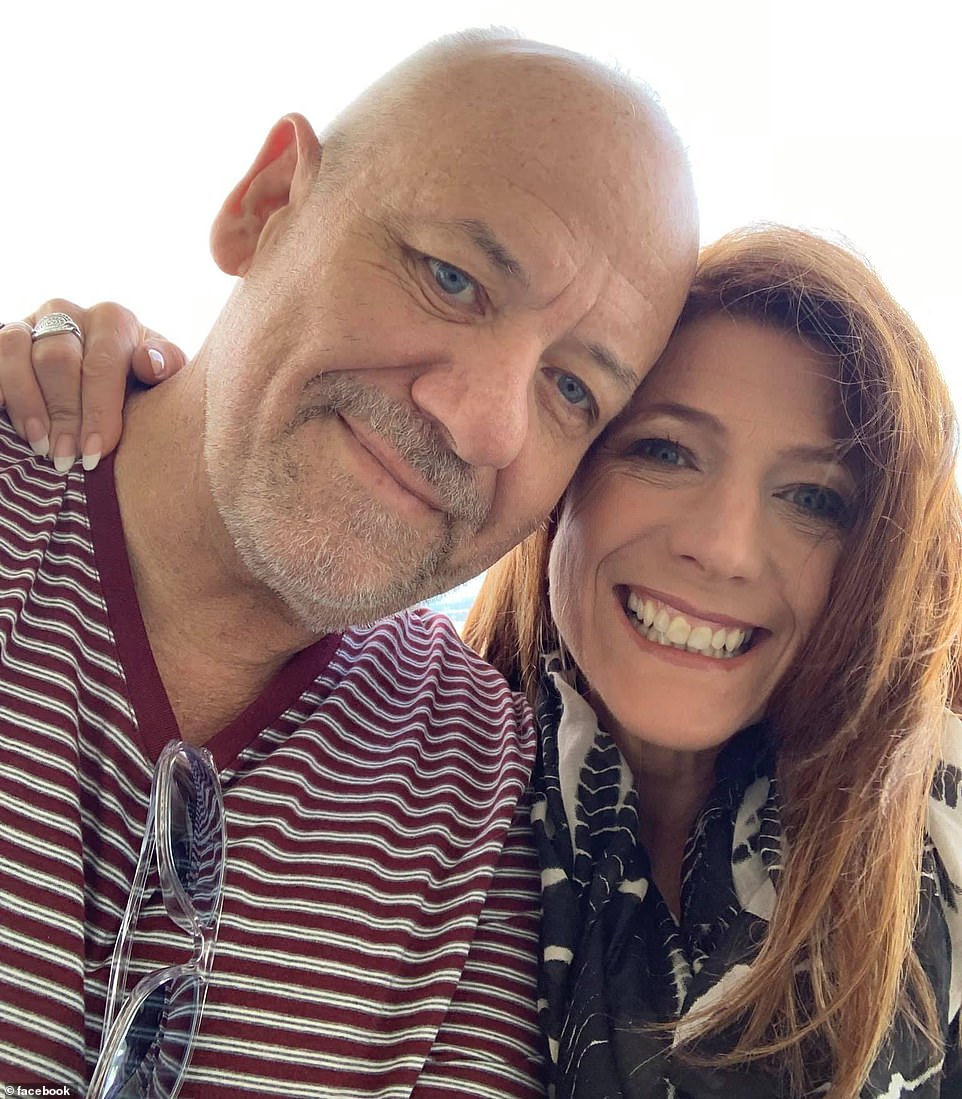 While the radio host is unsure of what the next chapter of her life will look life, Robin Bailey (pictured)  said her hope, and love for Sean Pickwell (pictured), would keep her moving forward

‘He was my absolute soul mate, the true love of my life and whatever I do from now on he will be in my heart and in my corner cheering me on.’

The radio star is now unsure of what the next chapter of her life will look like but says her hope, and love for Mr Pickwell, would keep her moving forward.

In January she returned to the airwaves, joining the Australian Radio Network’s (ARN) 97.3 FM’s breakfast show.

It is the first time she has worked since resigning from Triple M Brisbane in September.

‘The world is full of hope, it’s just sometimes it’s harder to see, but I want to be the one that believes that good things will happen,’ Ms Bailey said. 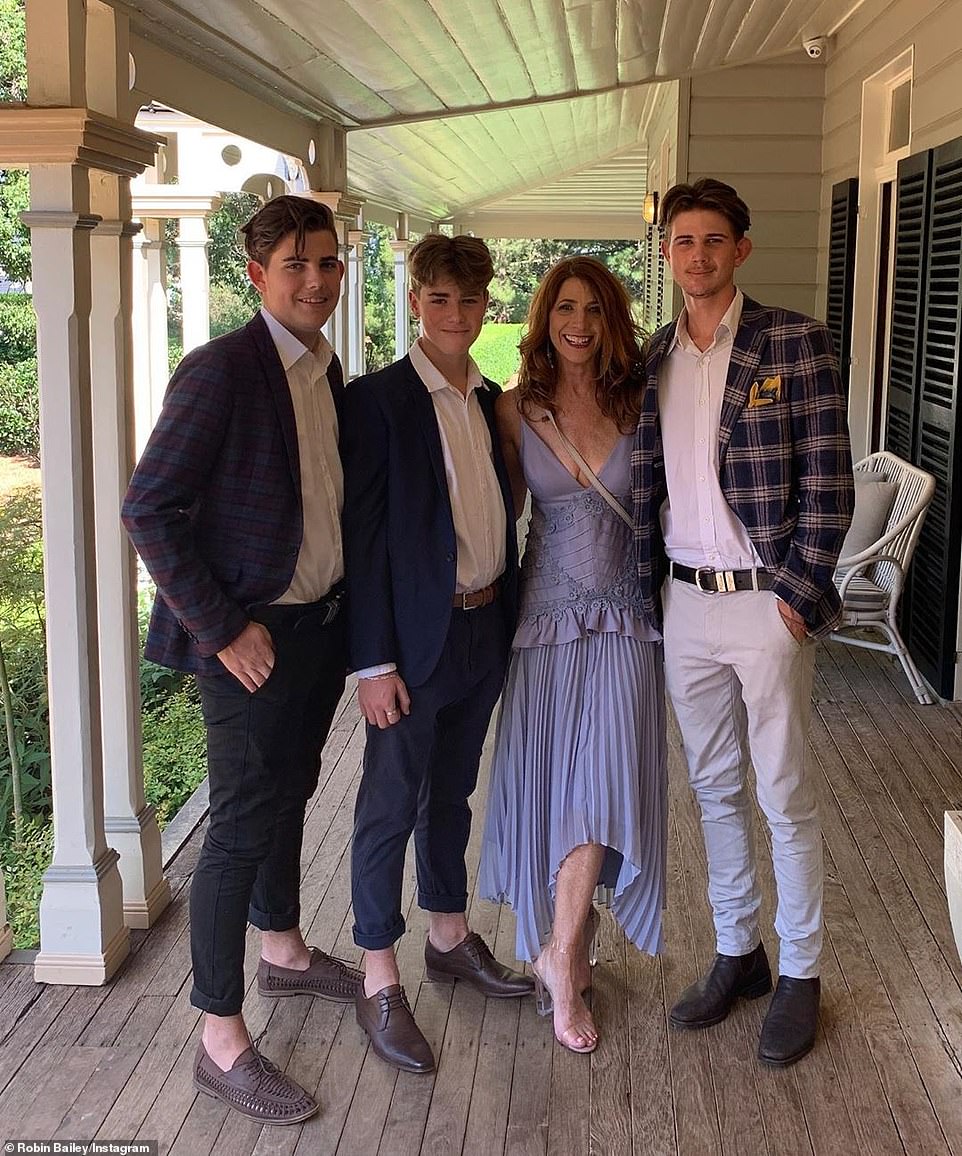 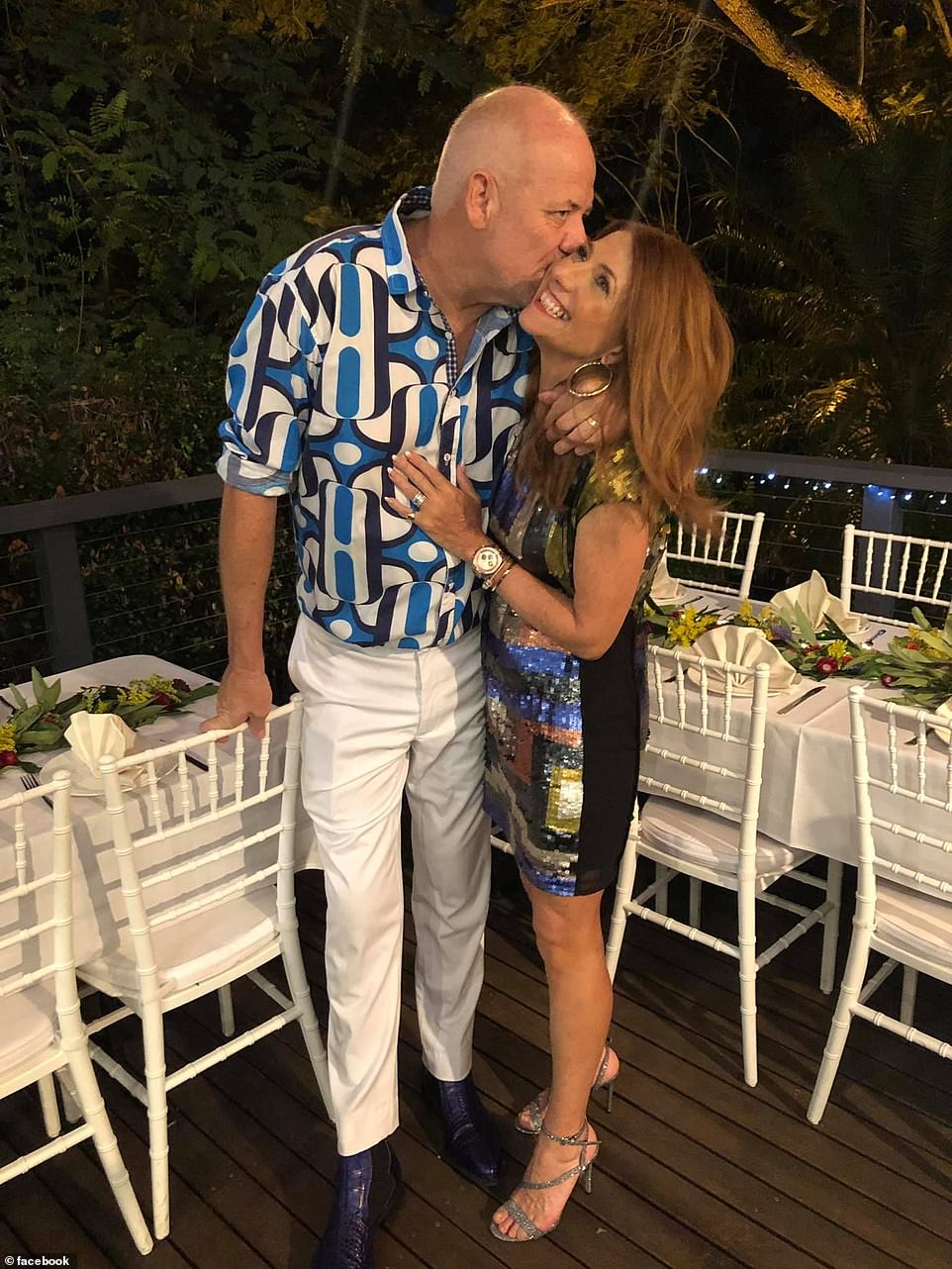 The mother-of-three said she would ‘survive’ the devastation, which would, in turn, make her more grateful for her friends and family in the years to come.

Throughout the coronavirus pandemic, she had been taking time to reflect on the past 12 months – spending time on the Gold Coast and Sunshine Coast alone.

Ms Bailey then sold her $500,000 home to embark on a soul-searching trip to India with her three sons.

She regularly posted pictures of the family as she worked on reminding the boys ‘how lucky they are’.

Speaking about his brave mum Piper said that Ms Bailey was incredibly brave and although she ‘cries a lot’ she is always trying to be the strongest person she can be. 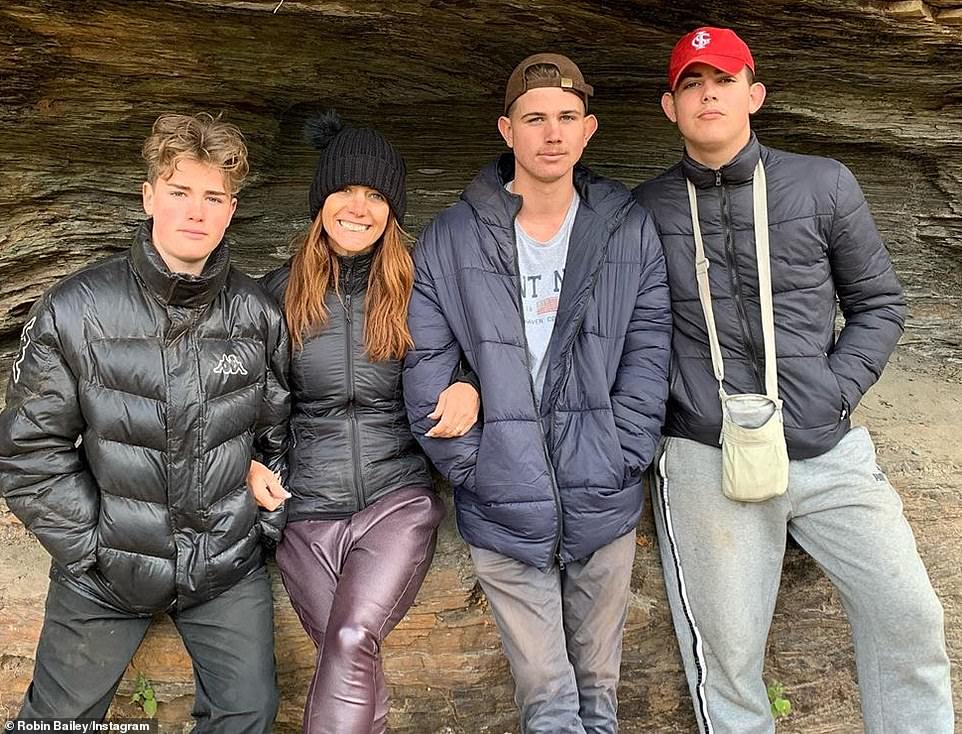 While in India, Robin Bailey (pictured with her sons) uploaded regularly as she worked on reconnecting and reminding the boys ‘how lucky they are’