‘Never has a mother been more proud’: Sarah Ferguson breaks her silence on Princess Beatrice’s surprise ‘loving’ wedding in gushing online tribute to the royal and ‘dear’ Edoardo Mapelli Mozzi

Sarah Ferguson has shared a gushing tribute online to her daughter Princess Beatrice after the royal married Edoardo Mapelli Mozzi in a secret wedding ceremony on Friday.

The Duchess of York, who is often known as Fergie, 60, said there had ‘never been a mother more proud than the wedding of Princess Beatrice, 31, to dear Edo’, after her daughter married the Italian property developer, 36, in a surprise service in the grounds of the Royal Lodge on Friday

Posting on Instagram today, Fergie wrote: ‘Never has a mother been more proud than the wedding of Eugenie and Jack, and again with my Beatrice’s loving wedding to Dear Edo. I am so lucky with my girls, and now the best sons-in-law.’

Princess Beatrice and Edo tied the knot in a private, intimate service at the Royal Chapel of All Saints, near her parents’ Windsor home.

The Queen, 94, the Duke of Edinburgh, 99, the bride’s parents Prince Andrew and the Duchess of York were among the ‘close family’ in attendance. 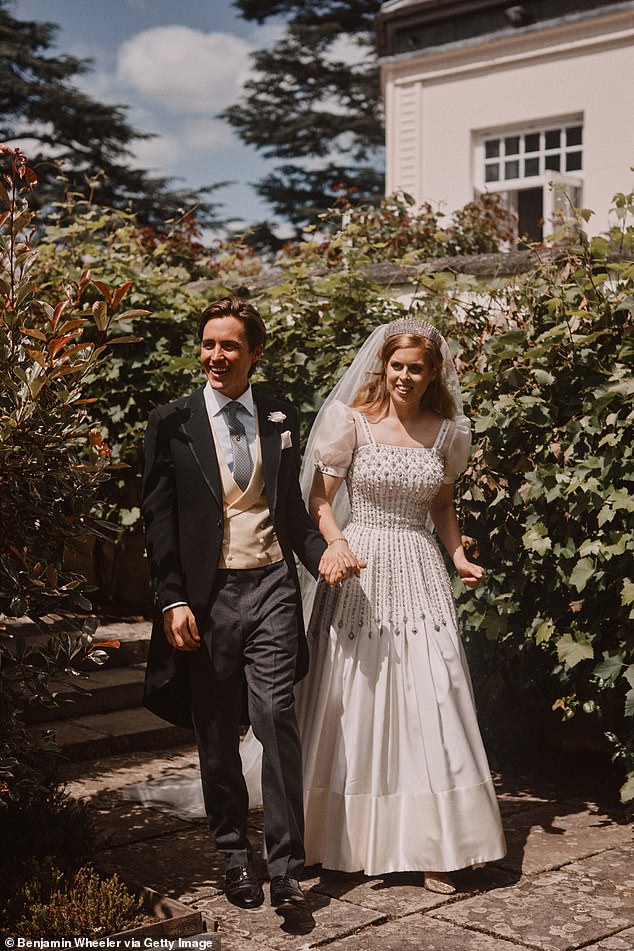 She wrote: ‘Thank you to all the very special and kind people that took the time and trouble to send amazingly caring and supportive messages.’

Alongside her message, she also shared a quote online, which read: ‘Happiness cannot be travelled to, earned, worn or consumed.

‘Happiness is the spiritual experience of living every minute with love, grace and gratitude.’ 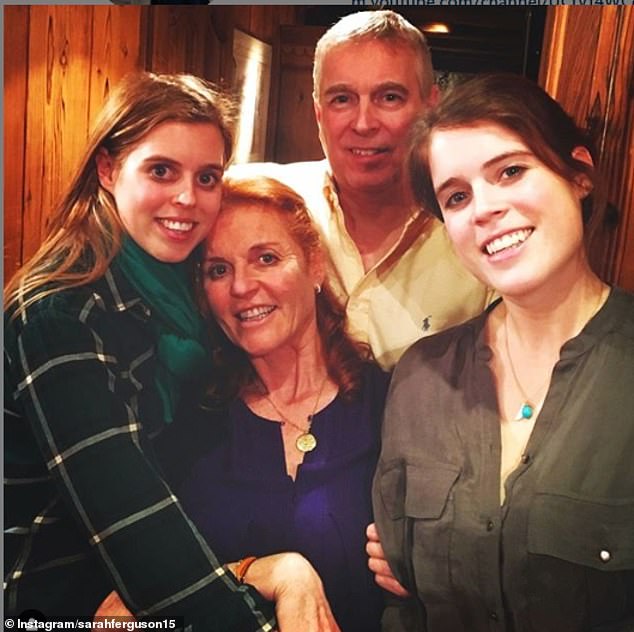 In the loving online post, Fergie said she felt ‘so lucky’ with her daughters Princess Beatrice and Princess Euegnie, as well as ‘the best sons-in-law (pictured, with Prince Andrew) 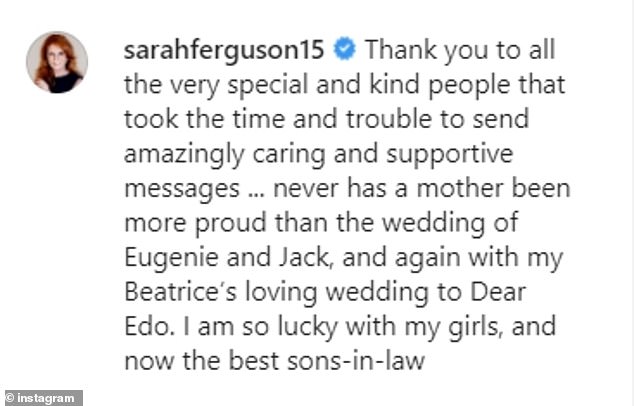 Fergie’s online tribute comes days after Princess Eugenie posted several wedding photographs of the couple together, writing: ‘I am so proud of you and I’m so excited to support you in the next chapter of your life.

Social-distancing restrictions and current government guidelines allowing a maximum of 30 people at a wedding meant the couple were unable to invite any of their famous friends, including singer Ellie Goulding, Karlie Kloss and Cressida Bonas.

It remains to be seen whether they will hold a celebration at a later date, but some of their inner-circle couldn’t wait to share their delight and posted gushing tributes on Instagram over the weekend, including Valentino co-founder Giancarlo Giammetti and Sarah Ferguson’s assistant Antonia Marshall. 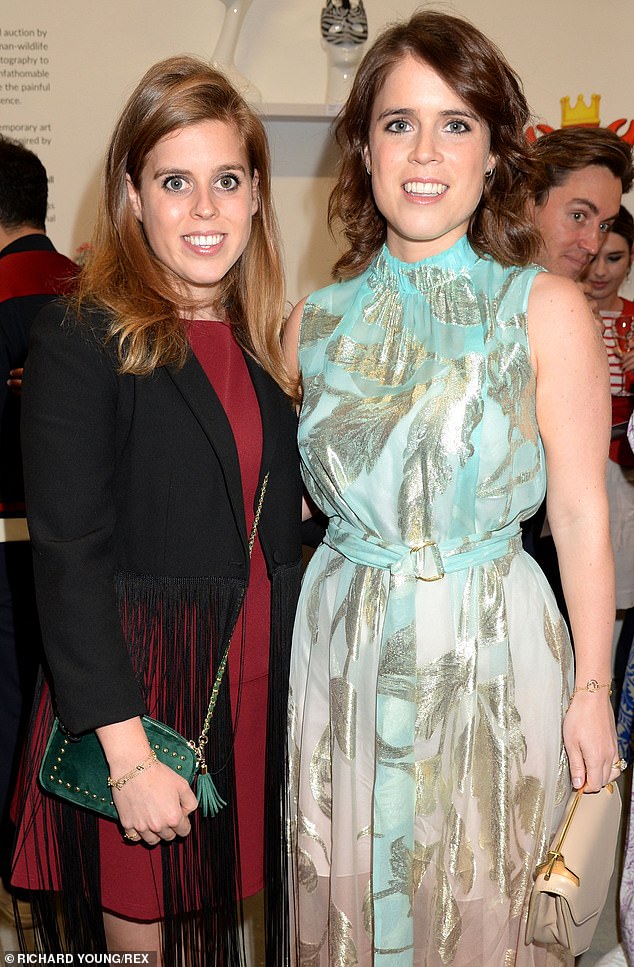 It comes days after Princess Eugenie said she was ‘so proud’ of Princess Beatrice and Edo, before adding that she was ‘so excited to support’ the couple in the next chapter of their life 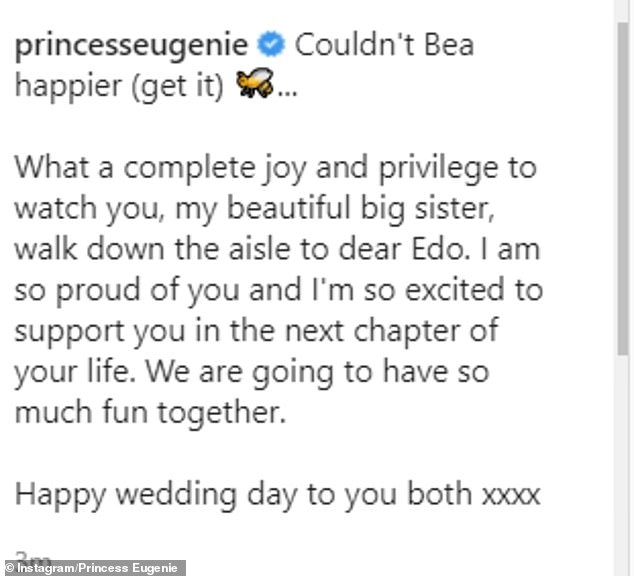 Beatrice and Edo, were due to tie the knot at the Chapel Royal of St James’s Palace, in London, on 29 May.

But their ceremony was postponed due to Covid-19 and no new date was given by the palace at the time.

Sarah Ferguson and Edo’s mum Nicola Williams-Ellis leapt into action as soon as the Government hinted last month that weddings would soon be permitted again.

However, reports from The Telegraph suggest that Beatrice then isolated with the Duke and the family at their home in ‘for some time’ ahead of the wedding, so that her embattled father Prince Andrew could walk her down the aisle. 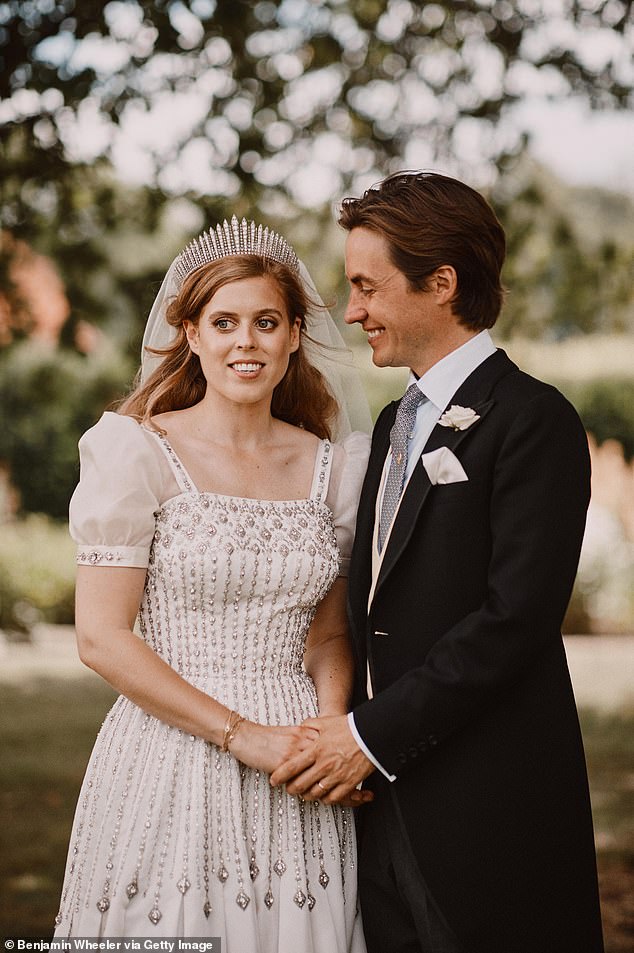 Social-distancing restrictions and current government guidelines allowing a maximum of 30 people at a wedding meant the couple (pictured on their wedding day) were unable to invite any of their famous friends, including singer Ellie Goulding, Karlie Kloss and Cressida Bonas 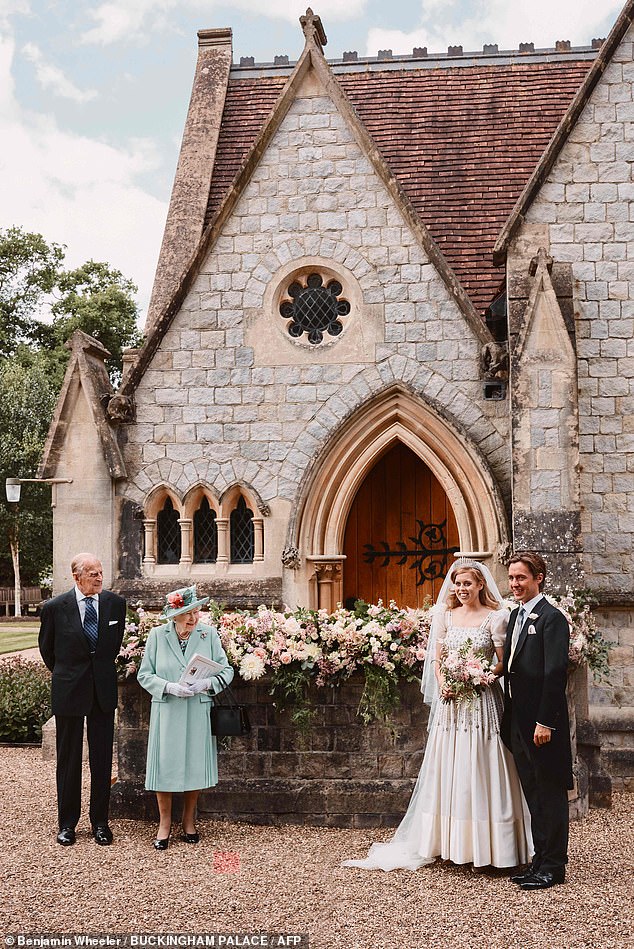 The Queen, 94, the Duke of Edinburgh, 99, and the bride’s parents Prince Andrew and the Duchess of York were among the ‘close family’ in attendance. Pictured, Princess Beatrice and Edoardo Mapelli Mozzi with the bride’s grandparents the Queen and Prince Philip

The young couple were ‘desperately sad’ that plans for a wedding at St James’s Chapel Royal and a reception at Buckingham Palace had to be cancelled, and resolved to marry ‘whenever possible’.

But they had only three weeks to organise caterers and florists, and for the Queen’s dresser Angela Kelly to help remodel and refit the 1960s Norman Hartnell evening gown to serve as a wedding dress.

Meanwhile, Canon Paul Wright, sub-dean of the Chapel Royal, and Canon Martin Poll, the Queen’s domestic chaplain, who officiated on Friday, hurriedly arranged the special wedding licence from the Archbishop of Canterbury.

More details of the secret ceremony have emerged in the last 72 hours, including the bride’s charming decision to wear the Queen’s wedding tiara on her own big day.

It also emerged that Edo’s son Christopher, known as Wolfie, served as best man and usher at the intimate service. 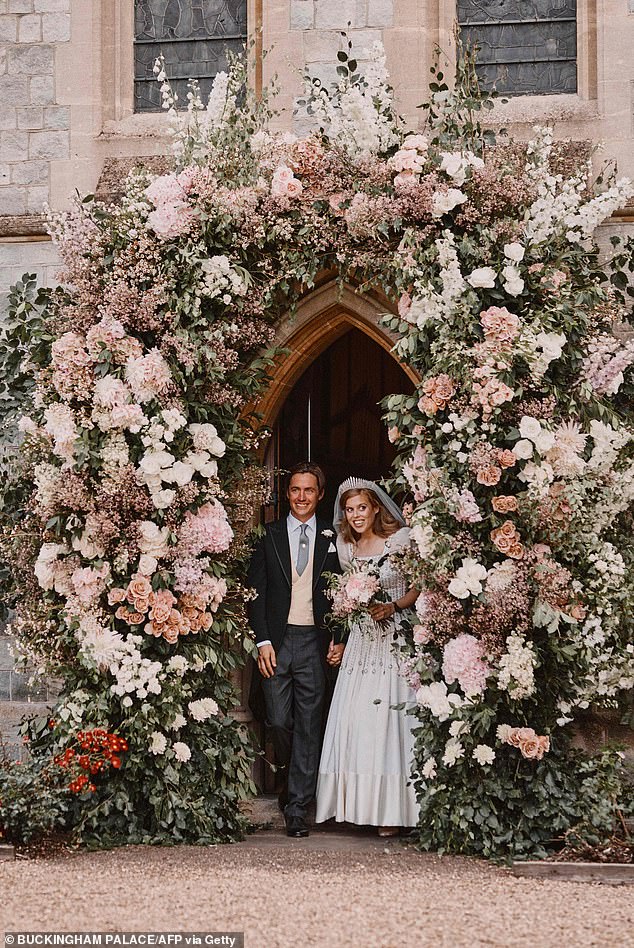 The church was decorated with pink and white delphiniums, roses, waxflower and hydrangeas from Windsor Great Park. Pictured, the newlyweds exit the chapel following their wedding

Edo’s sister Natalia, 38, and her husband Tod Yeomans, 36, arrived with their two children Coco and Freddie on Thursday afternoon for a quick rehearsal.

The secluded Chapel of All Saints is opposite Royal Lodge, so Prince Andrew walked the bride to the church and down the aisle. The Queen and Prince Philip had slipped in a through a side entrance, thus maintaining social distancing. 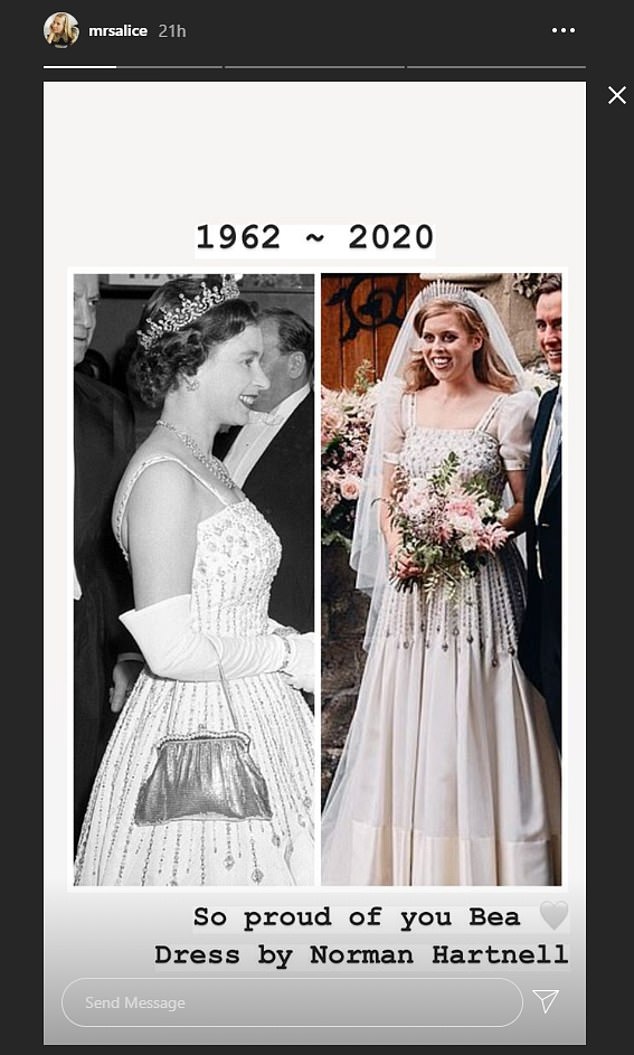 The Queen’s dresser Angela Kelly helped remodel and refit the 1960s Norman Hartnell evening gown (left) to serve as a wedding dress (right). Above, a post shared by Alice Naylor-Leyland

The church was decorated with pink and white delphiniums, roses, waxflower and hydrangeas from Windsor Great Park.

Sarah Ferguson and Mrs Williams-Ellis read the bride andgroom’s favourite poems: I Carry You In My Heart by E E Cummings and Shakespeare’s Sonnet 116.

There was no singing, but a selection of music was played together with the National Anthem.

Later, wedding photographs were taken, including four released to the media. None feature Prince Andrew.