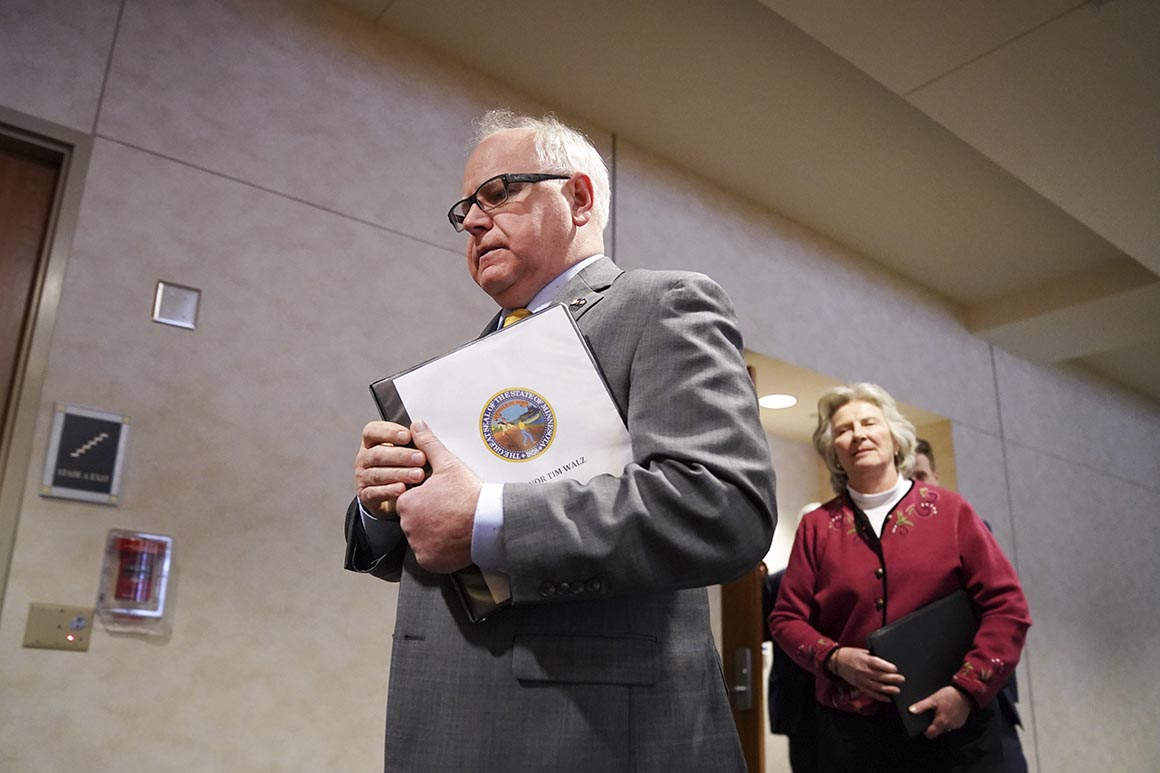 It’s been nearly a month since governors first called on the federal government to help provide testing so states could monitor the spread of the novel coronavirus.

They’re still waiting. And without knowing who’s ill and where, they can’t realistically slow the pandemic.

While President Donald Trump is touting a dramatic uptick in testing across the country, governors and public health officials say they are still being forced to dramatically ration the tests, while labs are confronting daunting backlogs that delay the results.

Walz blames the Trump administration’s decision to prioritize 14 of the nation’s hardest-hit areas, supplying them with needed material and leaving the rest of the nation to scramble.

“The minute they made that decision … our supply chain of reagents for our testing were dried up,” he said.

Even as President Donald Trump calls on states to do more and says the federal government is not “a shipping clerk,” governors have been on the phone with Vice President Mike Pence and other federal officials, begging for additional supplies, testing kits, swabs, reagents and protective equipment.

“I think it’s critical the feds move a lot faster on this stuff,” Massachusetts Gov. Charlie Baker said on Wednesday.

Oklahoma Gov. Kevin Stitt said his state is “critically low” on test kits and that he has been pushing the federal government for help.

The shortage of tests means that in many states people who believe they might have contracted the virus can’t know for sure and are told to stay home for weeks. It means health care workers don’t know whether they’ve contracted the illness even as they treat infected patients and tend to members of high-risk groups, such as the elderly, who might be in the hospital for other reasons. And it means public health officials are left guessing where they should direct resources because they can’t be certain whether there are clusters of cases.

Trump on Thursday insisted that governors have all they need, telling reporters he was hearing “very good things on the ground.”

“I can tell you what we’re doing is working with local governors to get them what they want,” Trump said.

“We’re the boots on the ground. We know what’s available,” said Kris Ehresmann, infectious disease division director for the Minnesota Health Department. “Some of the commercial labs do not have the materials they need.”

That’s left states to impose strict criteria on who can be tested, frustrating people across the country who are showing symptoms, worried but were told to wait and see if their cases worsen. In several states, only those who are hospitalized or at high risk, including those with underlying conditions, can be tested.

“Most individuals with mild symptoms do not need to be tested even with expanded testing options,” Indiana State Health Commissioner Kristina Box said during a news conference on Thursday. She added even though commercial labs were scaling up testing capacity in the state, they will still have to limit who is getting the tests. “We still have a shortage of supplies and we need to be mindful of that.”

Shortages and testing backlogs continue to be reported across the country. In Eagle County, Colo., where state officials have reported a cluster of cases, the local hospital, Vail Health, confirmed at least 400 people are waiting to be tested.

White House officials have sent mixed messages, telling states and Congress that supplies were on their way while acknowledging those supplies still might fall short. Last week, NIH infectious disease expert Anthony Fauci lamented to lawmakers that the testing effort to date was “a failing,” and CDC Director Robert Redfield told POLITICO he was not confident the U.S. has sufficient supplies of materials needed to prepare samples for testing.

Still, Trump repeatedly assured governors that supplies were on the way. Meanwhile, the days have turned to weeks, and the shortages persist.

“I feel a little like Charlie Brown and Lucy with the football with the federal government,” said Illinois Gov. J.B. Pritzker.

The Trump administration on Sunday announced it was teaming with Walmart to provide drive-thru testing in the giant chain’s parking lots, though it is unclear when those testing sites will be ready. Some state officials said they hadn’t received guidance from the administration on those plans and were unclear how they would fit into their broader testing work. They also had concerns about exhausting already limited supplies.

“There hasn’t been specific messaging to state public health folks about this,” said Minnesota’s Ehresmann, adding that her department found out about the announcement during the White House news conference. “It remains to be seen how that will impact things.”

That number is up from 27,000 tests on Tuesday — indicating private testing is starting to ramp up, in part due to diagnostic companies like Hologic and Thermo Fisher gaining emergency use authorization from FDA.

But private labs are still not meeting demand.

States looking to lean on private labs for quick testing results might be disappointed. Quest Diagnostics, which is conducting testing in Marlborough, Mass.; Chantilly, Va.; and San Juan Capistrano, Calif., says it expects patients and providers to get testing results within three to four days of specimen pickup. But a company spokesperson told POLITICO that the timing could slip due to high demand.

States that are waiting on reagents or other supplies from the CDC are trying to use workarounds to keep up testing capacity in their public health labs, but it is increasingly challenging.

“We’re getting reagents wherever we can get them,” Ehresmann said. “The bottom line is our lab has been using several different testing methodologies in an attempt to maximize the testing we can do, and if the supplies for that are running out, we move to the next methodology. We’re constantly trying to keep things moving.”

Rob Davidson, an emergency room physician in Michigan and the executive director of the Committee to Protect Medicare, said the lack of testing combined with a critical need for manpower leaves patients at risk. Doctors are being told to keep working until they have a fever, even if they are exposed to a patient with the virus. They are being told to use one mask per shift unless it becomes soiled. But because of the lack of testing, there is no way to know whether a doctor contracts the virus until it’s too late.

“For God’s sake, just get us more tests,” he said.