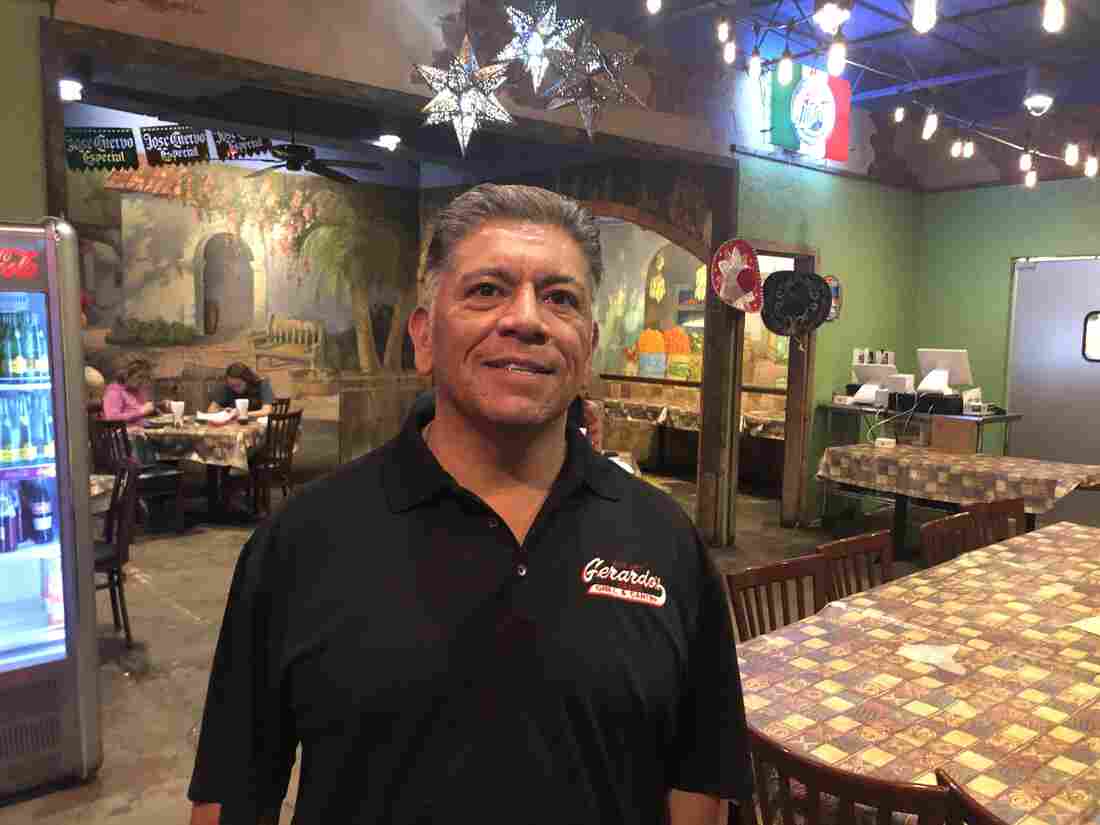 Jerry Morales owns Gerardo’s Casita, in Midland, Texas. The former mayor of Midland and past president of the Texas Restaurant Association has done anything and everything to keep his businesses alive over the past two months. John Burnett/NPR hide caption

Restaurant doors are cautiously opening again in Texas, but nothing is quite the same with the continuing threat of the pandemic. Eateries have had to get creative to survive, and learn how to protect their customers and staff.

Jerry Morales is the amiable, animated owner of Gerardo’s Casita, in Midland, Texas. With menus in hand, he greets customers who are just venturing out after seven long weeks of quarantine.

Wendy Holland, a Mary Kay beauty consultant, looks up grinning from a plate of beef tacos with pico de gallo.

“We do a lot of cooking, but I’m a little tired of what I cook,” she says with a laugh. “Ready for a little change today.”

The dining room is classic Tex-Mex décor — sombreros, beer signs and a Mexican flag. But most of the tables have been removed or roped-off to create a 6-foot buffer between diners.

That’s what the governor ordered earlier this month when he allowed restaurants to open at 25% of capacity.

Morales closed Gerardo’s and his two other restaurants in one world, and reopened in another. Across the country, more than 8 million restaurant employees have been laid off or furloughed, and the industry has lost at least $80 billion in sales, according to the National Restaurant Association. Now that Texas Gov. Greg Abbott has allowed restaurants and other businesses to reopen, the state is “embarking on a grand experiment in public health,” one doctor here warned.

For a restaurateur, it means unimagined challenges.

“We had to start being nurses in our restaurants,” Morales said. “You’ve got to look for signs now of temperature, coughing, sneezing, people holding their chest. If you’re back in the kitchen and a delivery person comes in with a major cold, you have my permission to kick ’em out immediately!”

All that, and they still have to make sure the fajitas come out sizzling.

As a former mayor of Midland and past president of the Texas Restaurant Association, Morales is a take-charge guy. He’s done anything and everything to keep his businesses alive in the last two months of restaurant hell. First, there was the impromptu store.

“We already have essential goods that our food suppliers would deliver us every day,” he says. “So we were selling beans and rice, sugar was a big hot commodity, eggs, milk, bacon, hamburger meat, chicken, cheese, flour, all those things that our customers needed.”

When stores ran out of bleach, Gerardo’s created its own household sanitizer.

“We put a formula together that had soap, bleach and a few other items, put a label on it and called it the Corona Killa,” he explains. “So we sold about 400 bottles of that within days.” 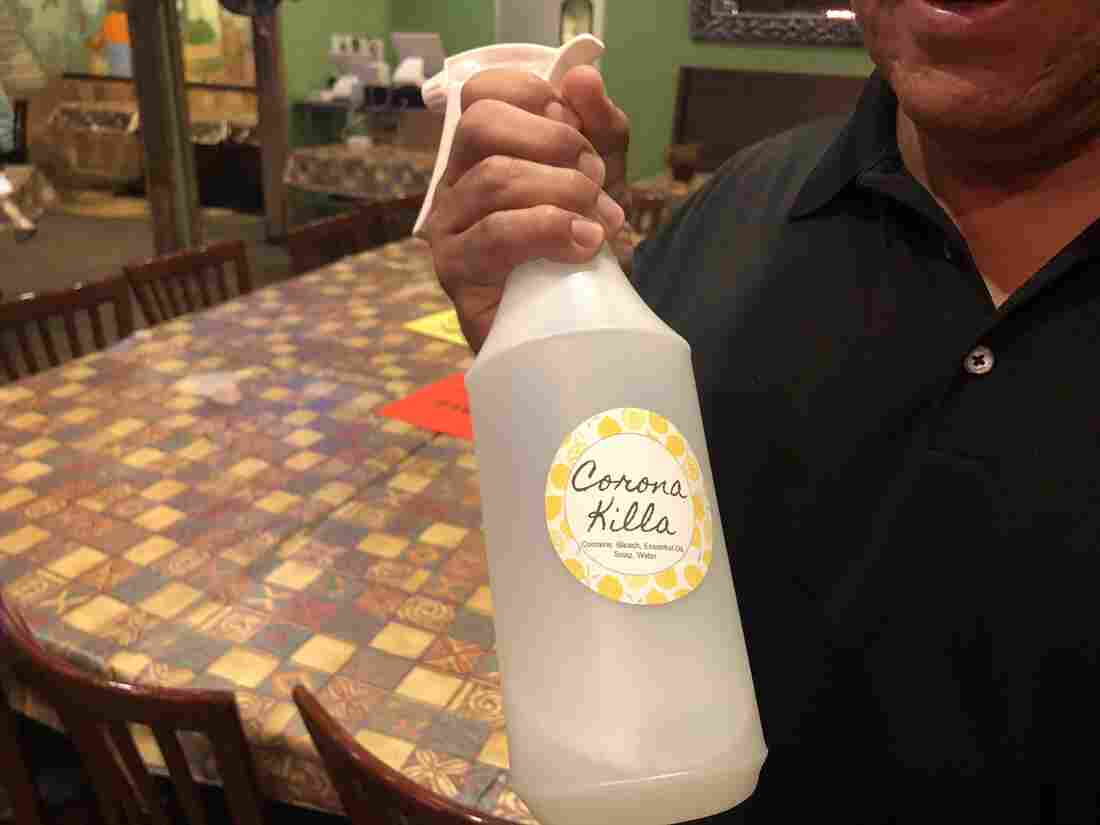 When stores ran out of bleach, Gerardo’s created its own household sanitizer. John Burnett/NPR hide caption

After the state passed an emergency measure to let restaurants sell alcohol-to-go, the Corona Killa was followed soon after by the Corona-rita.

“We started selling packages of Corona-rita as our margaritas. We were strategizing, we were thinking off our feet all the time,” Morales says.

The public reaction to Texas lifting stay-at-home orders has been mixed. Some folks are still hunkering down at home. Others are stretching their legs and tiptoeing back into public life.

“This is the first time out in, literally, in seven weeks,” said Richard Scherer, a petroleum engineer, who was having the catfish special. “It’s for mental health purposes that I got to get out. Seriously.”

His lunch partner, Jay Reynolds, a local oil and gas investor, was not troubled that going out to eat — he had grilled chicken breast in salsa verde — was premature.

“I believe if we do what they ask us to do, I feel safe,” Reynolds said. “I feel like I want to get out, just like Richard. I’ve been at my home, my office. That’s all I’ve done. So I think the virus is serious but I think you’ve got to go on with your life.”

Gerardo’s Casita is struggling, like every other restaurant in town. Jerry Morales is looking anxiously toward Monday when Gov. Abbott will decide whether to let restaurants increase their occupancy from 25% to 50%. The proprietor shudders to think what happens if a new wave of the coronavirus hits next fall.

“I don’t know that restaurants can survive another round,” he said. “It’s so hard and very scary.”