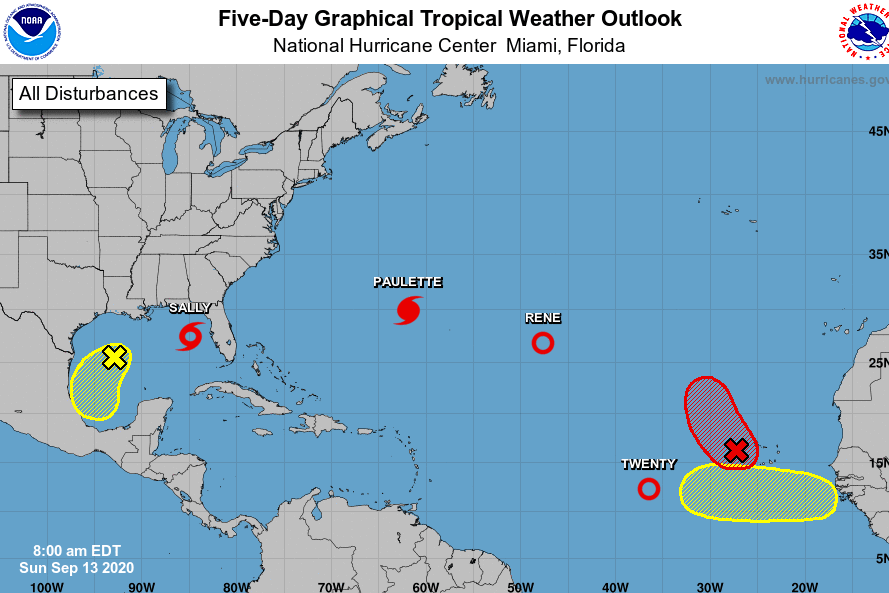 In what has already been an active hurricane season, storm watchers are closely monitoring a pair of weather systems that threaten to deliver more damage.

Hurricane Paulette is rolling toward Bermuda and expected to bring heavy rainfall along the coast beginning Sunday night, according to the National Hurricane Center. The NHC said Paulette is expected to be a “dangerous hurricane.”

Meanwhile, Tropical Storm Sally is threatening to grow into a hurricane as it moves toward the Gulf Coast. The storm is expected to hit New Orleans and surrounding areas as a hurricane by Tuesday morning, according to the NHC.

Residents of Bermuda were urged to protect life and property ahead of Paulette, which intensified into a hurricane late Saturday and is forecast to bring strong winds, coastal flooding and storm surge to the territory, hurricane officials said.

The storm is moving towards Bermuda with maximum sustained winds of 80 mph, forecasters said. Beginning late Sunday, forecasters expect Paulette to bring up to 6 inches of rain and “life-threatening surf and rip current conditions.”

Paulette was 240 miles southeast of Bermuda on Sunday morning and moving northwest at 14 mph. The center of the storm is forecast to move near or over Bermuda Monday morning.

Along parts of the Gulf Coast, residents are similarly bracing as a hurricane warning is now in effect from Morgan City, La., to Ocean Springs, Miss. Forecasters expect Sally to bring life-threatening storm surge, hurricane-force winds and heavy rainfall starting on Monday.

As of Sunday morning, the tropical storm had maximum sustained winds of 60 mph with stronger gusts, forecasters said. A slow moving storm, Sally could dump up to 20 inches of rain on parts of the central Gulf Coast by the middle of the week.

If peak storm surge coincides with high tide, the water along the mouth of the Mississippi River to Ocean Springs, Mississippi, including Lake Borgne could rise between 7 and 11 feet. Other areas could see storm surge between 4 and 7 feet.

Louisiana Gov. John Bel Edwards declared a state of emergency ahead of Sally on Saturday, and urged residents to follow directions from local officials. The mayor of New Orleans, LaToya Cantrell, ordered residents living beyond the levee system to evacuate.

Sally approaches just two weeks after Hurricane Laura brought a massive storm surge to the southwestern Louisiana coast. Edwards said in a news conference Saturday that Sally “has the potential to be very serious.”

“Barely two weeks ago, Louisiana suffered a devastating blow when Hurricane Laura came ashore as the strongest hurricane ever to make landfall in Louisiana history, leaving a trail of destruction in its path,” he said. “This, when combined with the COVID-19 pandemic, can make us all weary. I implore Louisianans to take their preparations seriously.”