Liz Truss, the UK’s international trade secretary, will express her anger at American officials this week over “punitive” tariffs levied on British goods in her first face-to-face meeting since negotiations for a trade agreement began.

The meeting between Ms Truss and top American officials comes as the two sides move into the second week of the third round of talks, which have so far been conducted through online video conferencing because of the coronavirus pandemic.

Ms Truss told the Financial Times that while the US “talk a good game on free trade and low tariffs”, “the reality is that many of our great British products are being kept unfairly out of their market”. She is expected to raise the retaliatory tariffs as part of the Airbus and Boeing dispute in the aviation sector, as well as the prospect of further tariffs being levied on British goods

“This harms companies and consumers on both side of the Atlantic at a time when we need more trade and investment to help our economies recover from coronavirus,” she said.

Ms Truss added that during her US visit this week she will “be pressing hard to get these punitive taxes removed, and stressing that additional tariffs on great British products like gin is totally unacceptable”.

One ally of Ms Truss added: “Liz is genuinely outraged by the retaliatory tariffs and the threat of further ones on products like gin. She’s over there batting hard for Britain on this.”

Two people familiar with Ms Truss’s schedule said she was expected to meet Robert Lighthizer, the US trade representative, on Monday and Tuesday to discuss progress made so far.

“I think they see this as an opportunity to take stock of where we are, agree next steps and priorities and continue to build their relationship,” said a person familiar with the talks.

A USTR official confirmed that Mr Lighthizer was set to meet Ms Truss in Washington. A British official also confirmed the meeting.

Ms Truss’s visit to Washington despite the escalating coronavirus case numbers in the US underlines the UK’s desire to strike a trade deal with America quickly.

The UK Department for International Trade has suggested that a successful deal with Washington could eventually boost the British economy by £15bn a year.

In a joint statement issued in May, Ms Truss and Mr Lighthizer said both countries were seeking an “ambitious deal”, with a trade agreement “a priority”. They said they had “committed the resources necessary to progress at a fast pace”. 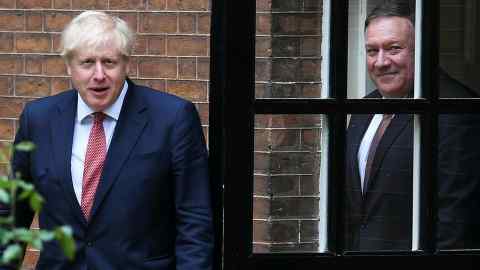 However, optimism of reaching a quick deal has waned on the British side. UK politicians, including prime minister Boris Johnson and Ms Truss, first insisted that a deal would be possible by late summer, before moving to suggest it could be signed before the US presidential election in November.

Last month, however, British officials said they had given up on hopes of reaching a deal ahead of the poll, blaming the Covid-19 pandemic for slow progress.

US officials have long been wary of closing any meaningful deal with London until the terms of Britain’s trading relationship with the EU are clear, because that will determine how closely, and in what areas, the UK’s regulations will remain aligned with Brussels.

Congressional aides and lobbyists in Washington have also long been sceptical of much progress before the presidential election, as the two sides grapple over contentious issues including UK market access for US farmers and patent protections for US pharmaceutical companies.