Travellers on the first commercial flight from New Zealand in seven months have landed in Sydney, after the two nations established the first phase of their trans-Tasman travel bubble.

Emotions were running high on Friday as families were finally reunited after the bubble opened overnight.

The bubble allows New Zealand travellers to fly to New South Wales and the Northern Territory without the need for hotel quarantine on arrival.

The deal, which has been in the works for months, is a one-way arrangement, meaning Kiwis returning home still need to do their 14-day mandatory isolation in secure hotels at a cost of $2,050.

But it’s bad news for Australians, who haven’t been granted the same rights to fly to New Zealand, and have been banned from travelling globally in all but exceptional circumstances since March 20.

Passengers were greeted with a sign that read ‘we’ve missed you’ as they made their way through the terminal to their loved ones. 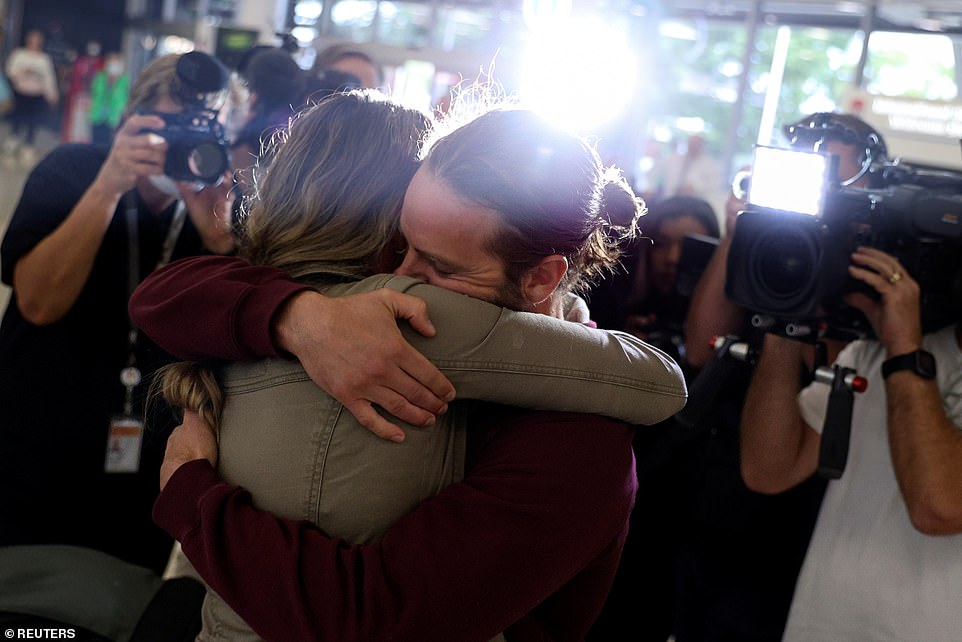 Reunited: Adam Draper and his partner Stacey Brown embrace each other as she arrives from New Zealand after the Trans-Tasman travel bubble opened overnight (pictured on Friday) 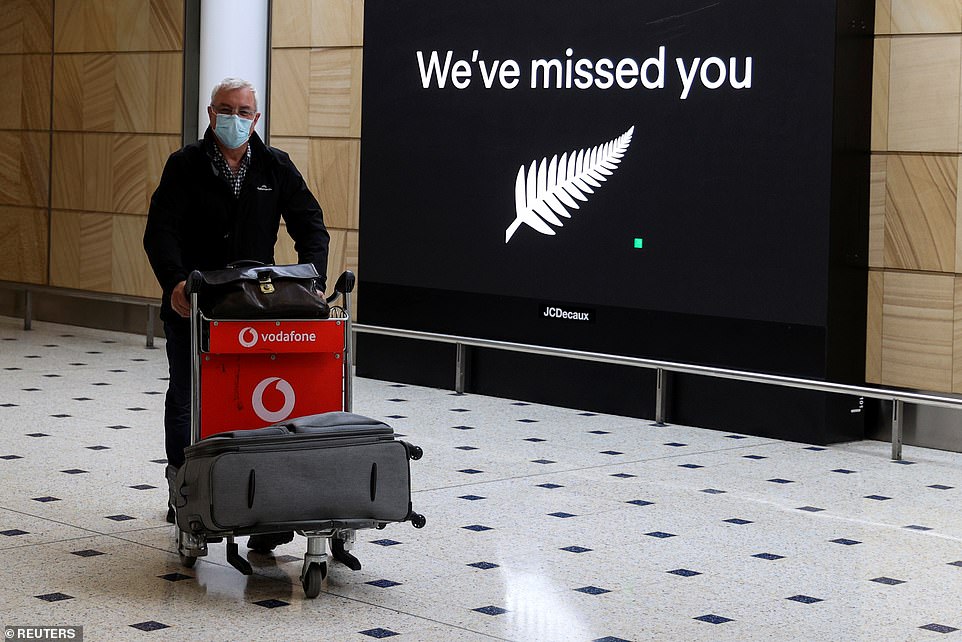 G’Day, mate: A passenger in a face mask arrives from New Zealand after the Trans-Tasman travel bubble opened overnight 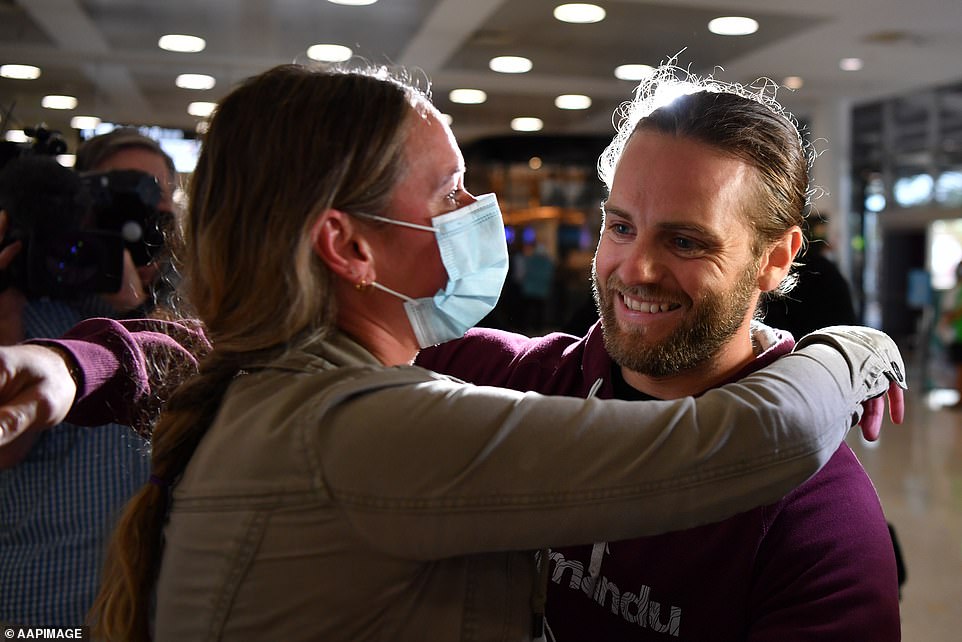 All smiles: Stacey Brown is welcomed home by her partner Adam Drape as she arrives in Sydney from New Zealand on Friday

There were hugs, kisses and tears as those stuck on either side of the Tasman came together after seven months apart as both nations closed their borders in March to stop the spread of the coronavirus.

‘We haven’t welcomed international travellers to Sydney in months that haven’t had to come through customs and go straight on to buses to hotel [quarantine],’ he said.

The first phase is going to provide a vital ‘proof of concept’ for further destinations and travel, he said. 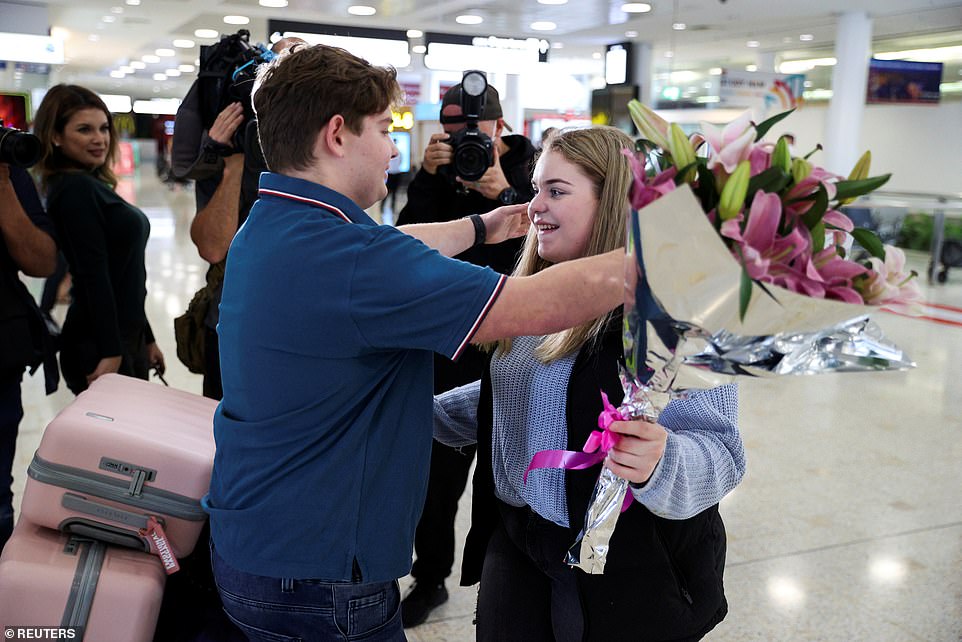 Young and happy: A couple embrace at Sydney International Airport on Friday after the first commercial plane from New Zealand landed 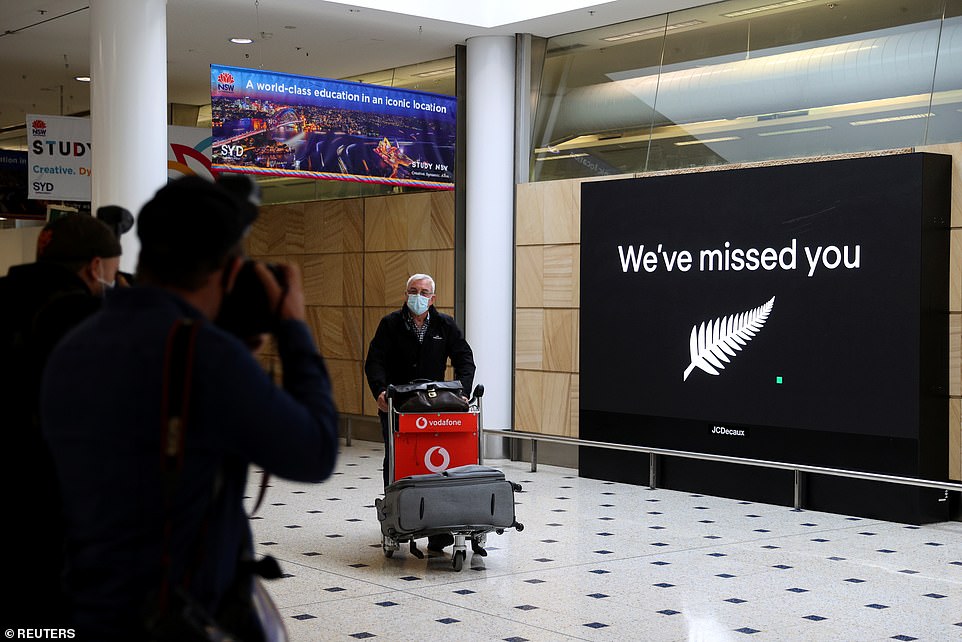 Welcome back: Passengers were greeted with a sign that read ‘We’ve missed you’ as they made their way through the terminal to their loved ones 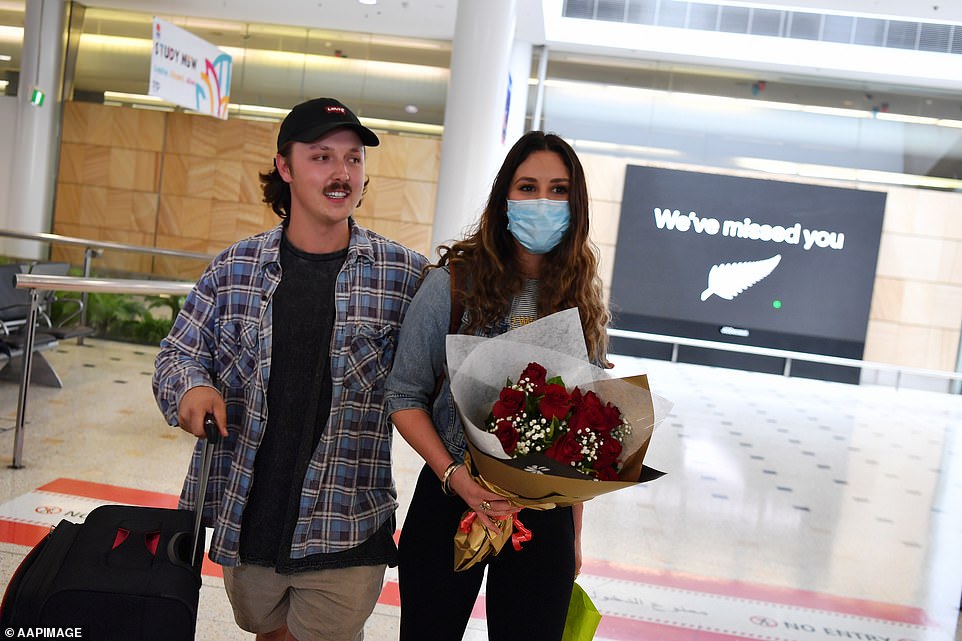 Blooming love: Taren Kowalski is welcomed home by her boyfriend Jayden Guest as she arrives from New Zealand arrive at Sydney International Airport in Sydney

Health Minister Brad Hazzard said all passengers arriving from New Zealand would be kept separate from other arrivals in the airport.

There will be 16 flights between the two countries each week, with the first flight arriving at midday on Friday. 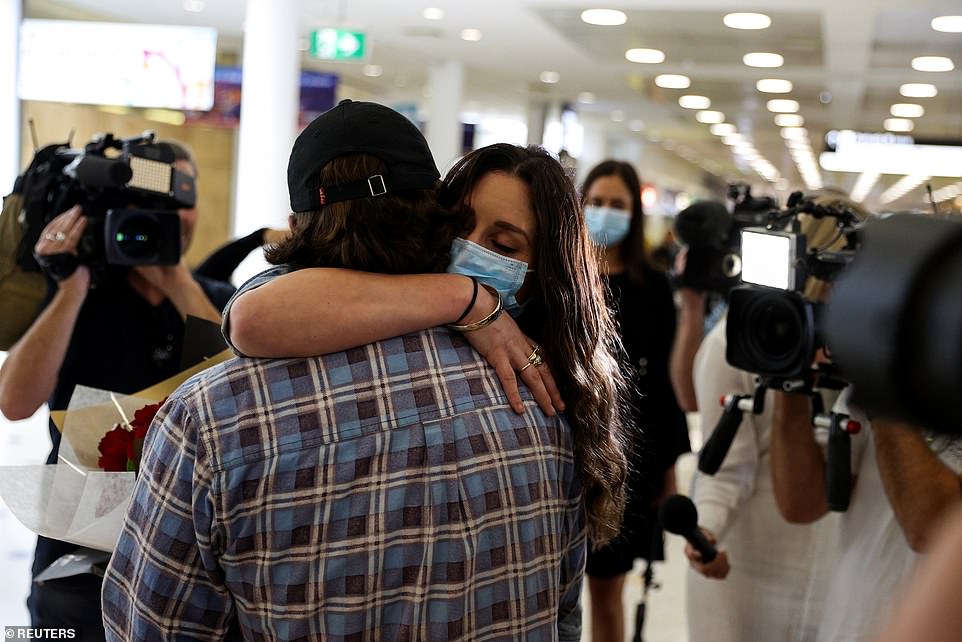 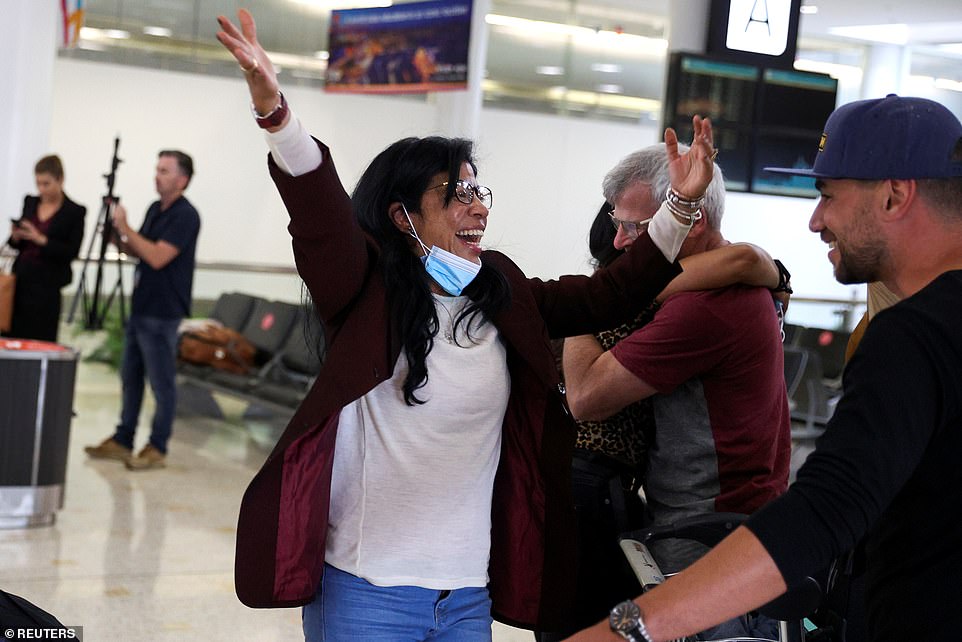 Overjoyed: An excited Deccy Ledezma is greeted by a friend as she arrives from New Zealand

Prime Minister Scott Morrison spoke highly of the deal on Friday, saying it shows promise for what may be possible in the coming months.

‘Here we are, already, before the end of the year, getting at least to some new point of normal when it comes to COVID-safe travel. But it has to be done safely.’

Mr Culbert said the next countries that could see mandatory quarantine dropped include Singapore, South Korea and Japan.

‘These are places that have done a good job (during the pandemic) and we have confidence in their health systems,’ he said. 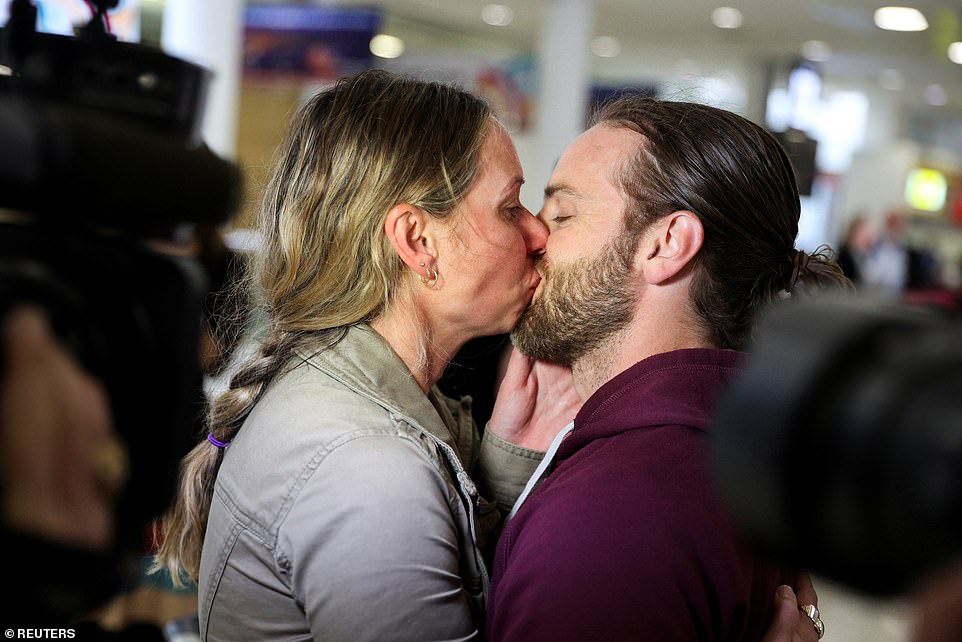 Smooches: Adam Draper and his partner Stacey Brown kiss as she arrives from New Zealand on board the first trans-Tasman flight 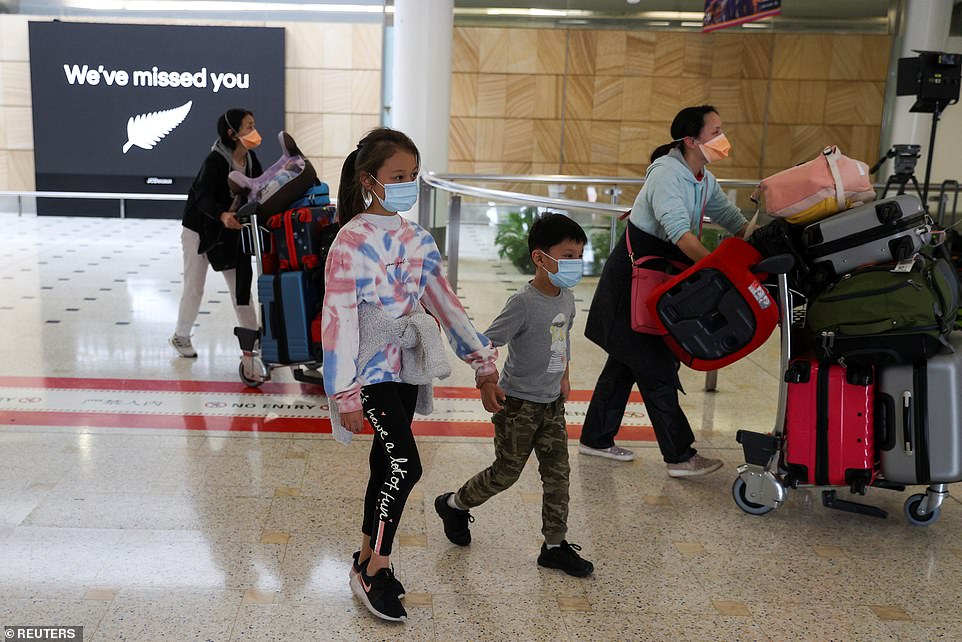 Double trouble: Kids in face masks walk hand in hand as they make their way through the airport on Friday in Sydney

Mr Morrison confirmed Australia was in discussion with the three nations, as well as the South Pacific, to open up travel.

‘There are countries that have performed well on the health front and Australia and those countries are one of a handful that has had the same level of success,’ he said.

‘But we have to go cautiously on this; very, very cautiously. COVID-19 hasn’t gone anywhere, it’s still there – it’s no less aggressive today than it was six months ago. We need to keep the habit of COVID-safe behaviours.’ 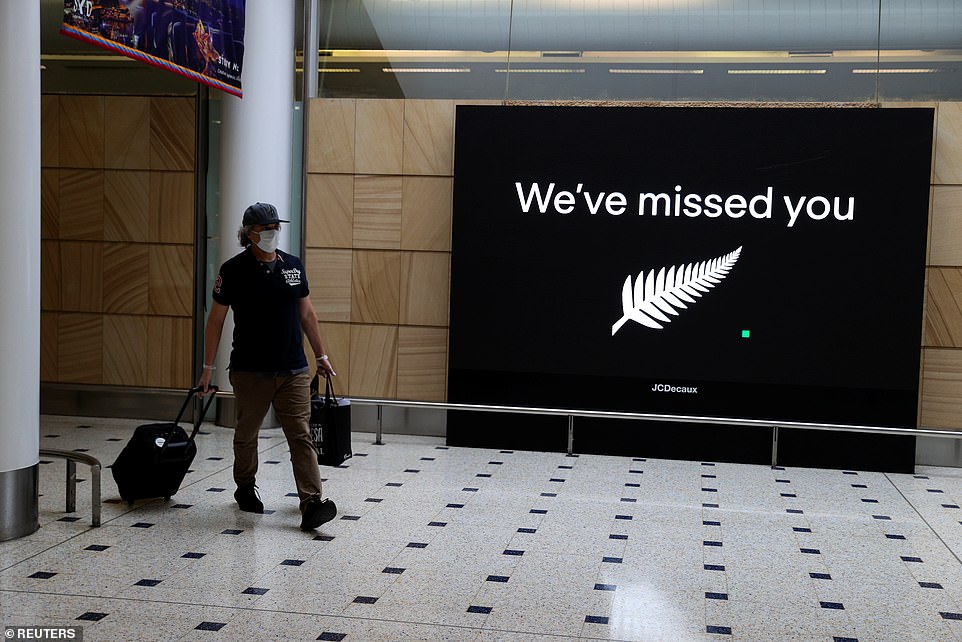 No quarantine: A man in a face mask arrives from New Zealand after the Trans-Tasman travel bubble opened overnight