Suicides among children, teens and young adults have spiked by 57% over the last decade, CDC data reveals

By Natalie Rahhal Us Health Editor

The suicide rate among Americans between ages 10 and 24 rose by 57 percent from 2007 to 2018, according to new data from the Centers for Disease Control and Prevention (CDC).

In 2018, suicide was the second leading cause of death for the age group, as well as those between 15 and 34.

Between 2016 and 2018, the suicide rate among Americans under 25 was curtailed somewhat, falling 47 percent, according to the new statistics, published Friday.

But they could easily begin to creep back up again, especially as the number of young people with signs of mental illness and distress surge amid the stress and isolation of the coronavirus pandemic. 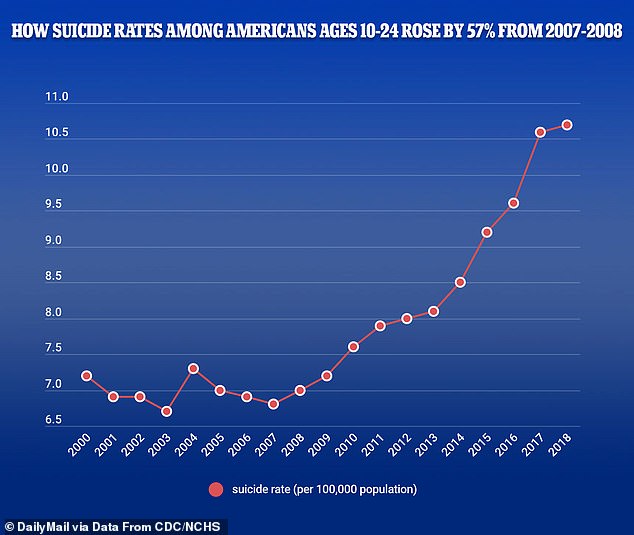 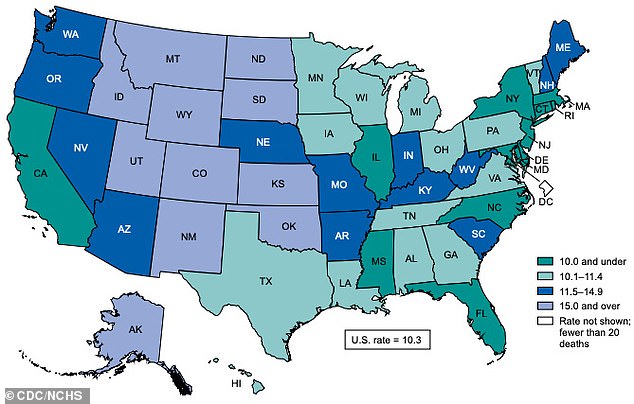 Suicides among 10- to 24-year-olds have risen by 57% over the last decade. Rates are highest in rural states like Alaska, New Mexico and Montana (purple)

The rate has been increasing steadily over the past decade.

Suicide is considered a ‘death of despair’ – alongside those caused by alcohol and drugs – a category of fatalities that has continuously hit rural and sparsely populated parts of the US particularly hard.

Other states at the top of the list included Montana, New Mexico, South Dakota and Wyoming.

Suicide rates were lowest in the wealthy, populous states in the Northeast – but still rose significantly over the past decade.

Suicides increased more steeply in Massachusetts, where the rate increased by 64 percent.

Although its overall rate of suicides was lower than places like Alaska, the steepest rise was seen in New Hampshire, where suicide rates among 10- to 24-year-olds has doubled since 2006. 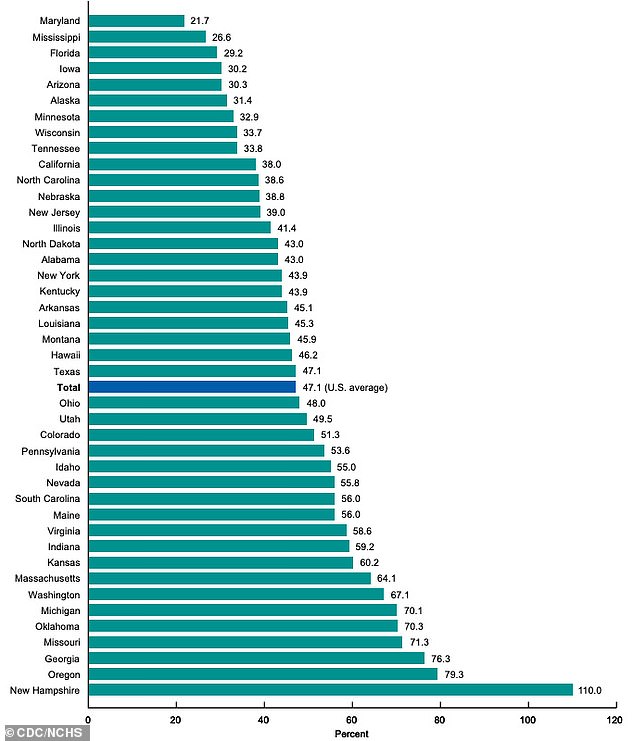 Suicides have increased most dramatically in New Hampshire (bottom), but have risen in every US state since 2007

Complete data on suicide rates amid the 2020 coronavirus pandemic are unlikely to be available for years, considering the most recent numbers captured by the CDC is from 2018.

But experts say the US has reason to be worried.

Signs of depression among Americans have tripled since the start of the pandemic, according to research published earlier this month by Boston University.

Those who develop severe depression are at far greater risk for suicide, and more than 18 percent of Americans could be headed in that direction.

Isolation is both a key to slowing the spread of coronavirus, and a key risk factor for suicide.

Since the pandemic began, K-12 schools and colleges have closed down, sending children and young adults home where they lack the social contact that fosters both development and mental health.

As schools begin to re-open across the US (although some colleges have moved back to remote learning after COVID-19 outbreaks), some health officials are concerned about an uptick in coronavirus cases.

But the CDC has said that the educational and mental health benefits of having kids in school outweigh the risk of COVID-19, which is typically mild in children.

And if young people are not in school, the mental health effects could drive suicide rates up even further, experts warn.

‘There are many reasons to suspect that suicide rates will increase this year too, not just because of Covid-19 but because stress and anxiety seem to be permeating every aspect of our lives,’ Shannon Monnat, co-director of Syracuse University’s Policy, Place and Population Health Lab told Bloomberg.

‘Anxiety is high in the population as a whole, thanks to political and social unrest. Children are not immune from those stressors.’